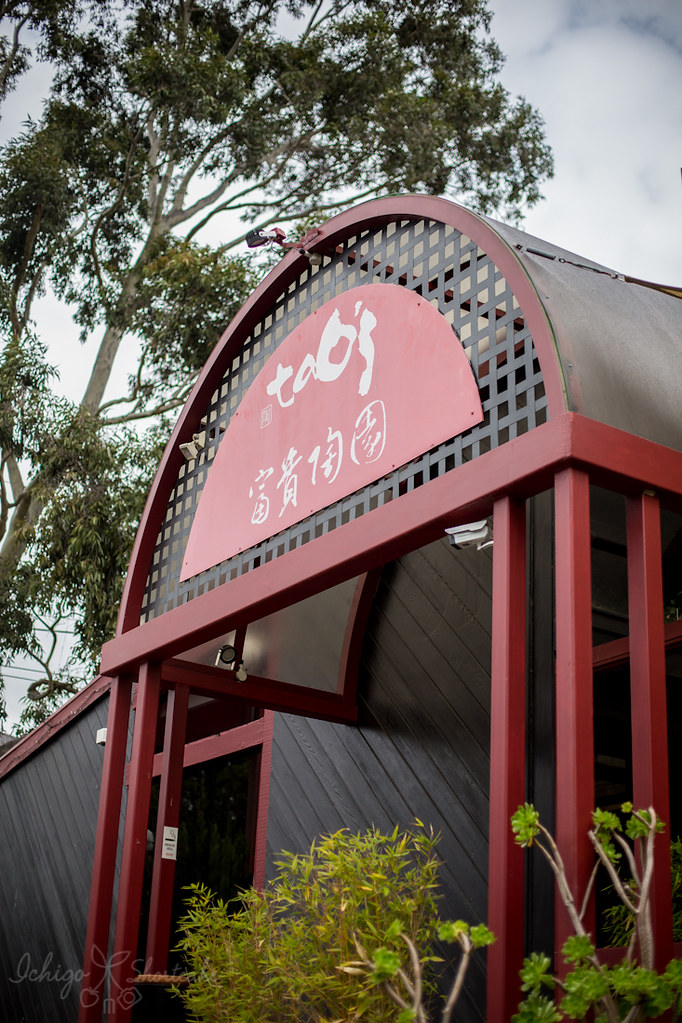 I dined at Tao’s Restaurant a few years ago and had a good impression of the place. The landscaped gardens, pagoda and the natural, wooden interior gives it a feel that it’s in the countryside. A hidden oasis. If you drive past it, you’d probably think it’s a regular Chinese restaurant because of it’s name, but in actual fact it’s far from it. 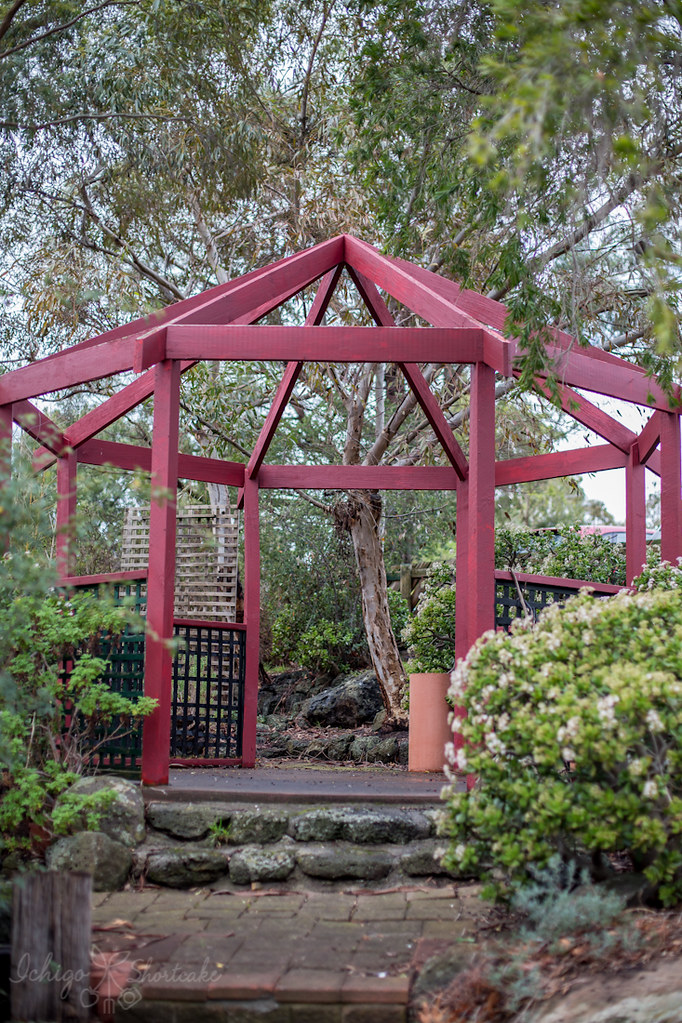 The food served here is modern International cuisine that’s influenced by Asian flavours. On the menu you will find soups and steaks along with sashimi and Thai curry. Talk about variety. 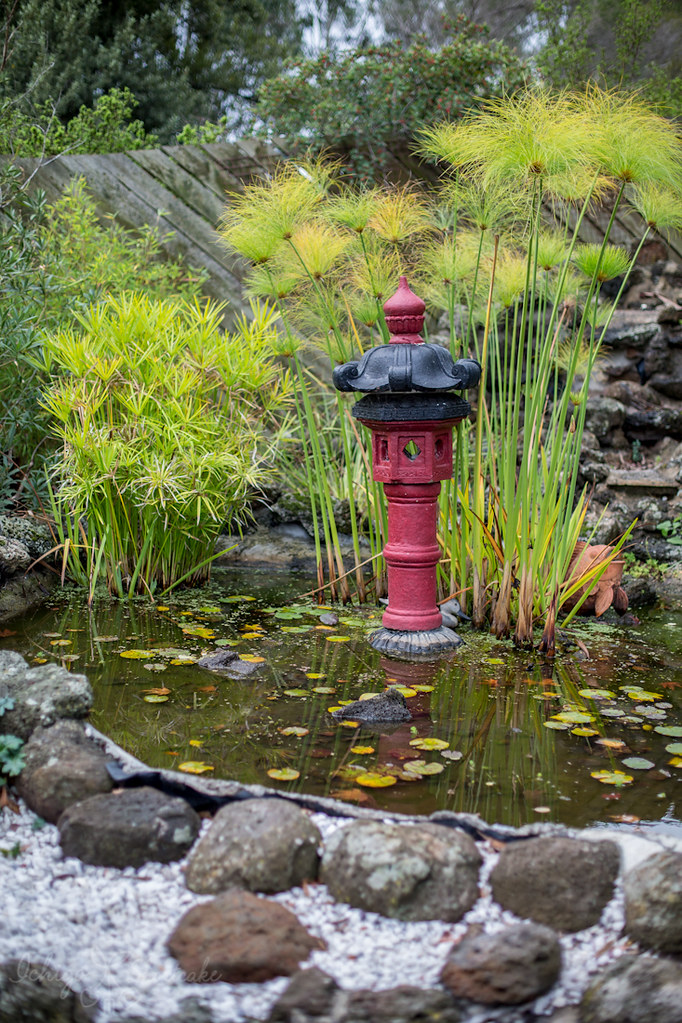 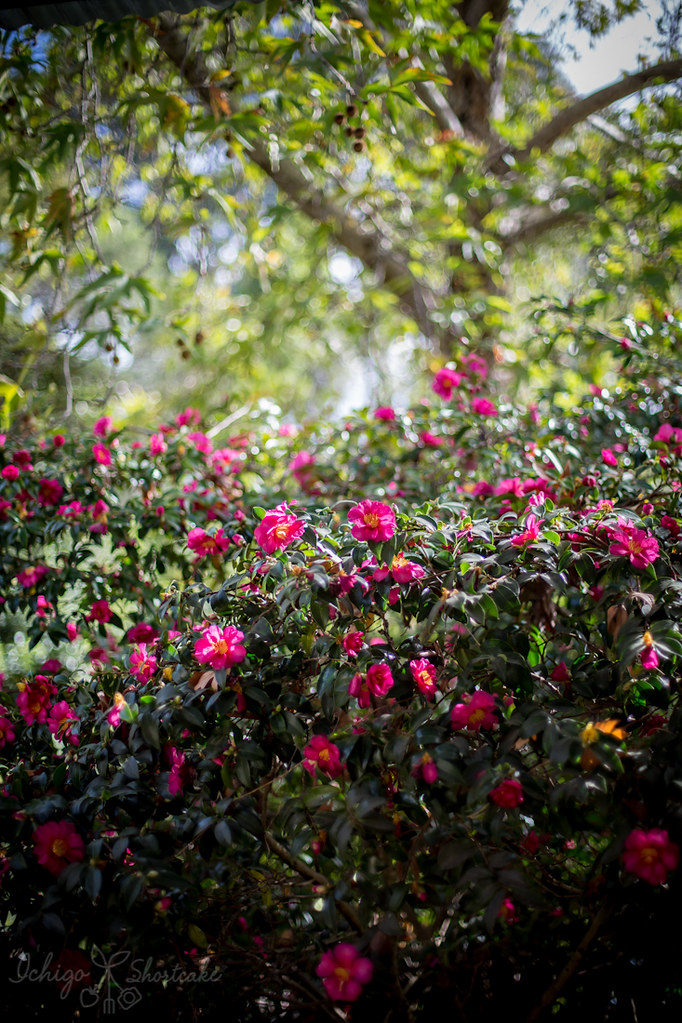 It was a set menu for $48 per person that day which we thought was good value. We got to pick 4 dishes – one entree, one soup, one main and one dessert. We decided to all pick mostly different things so we can have a taste of everything. 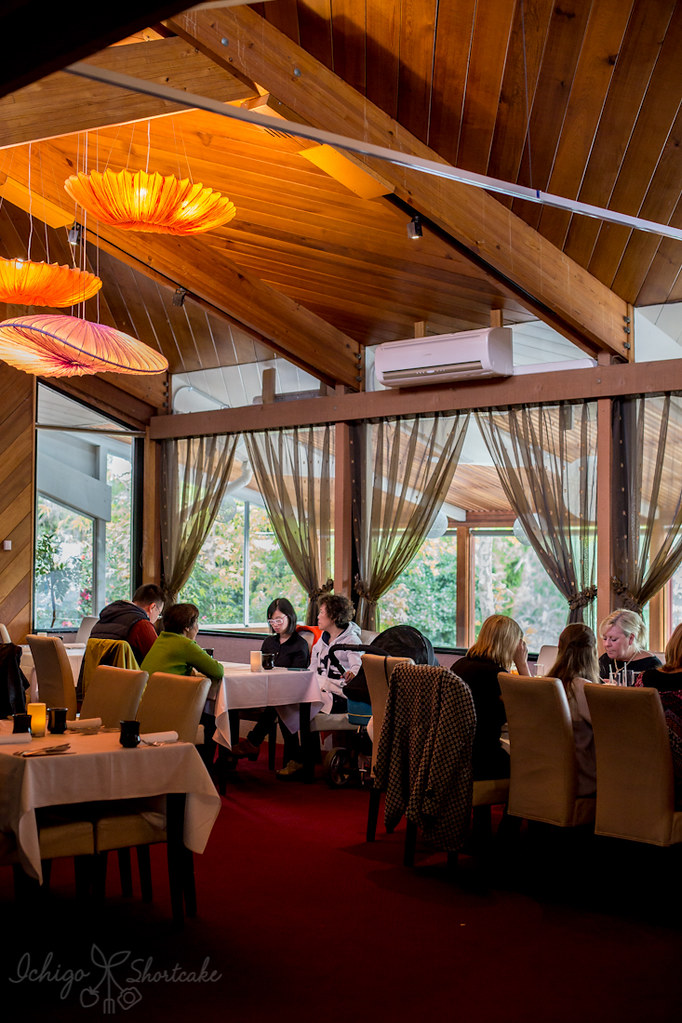 To start though we were provided with free appetisers consisting of a salad and a piece of sweet potato. 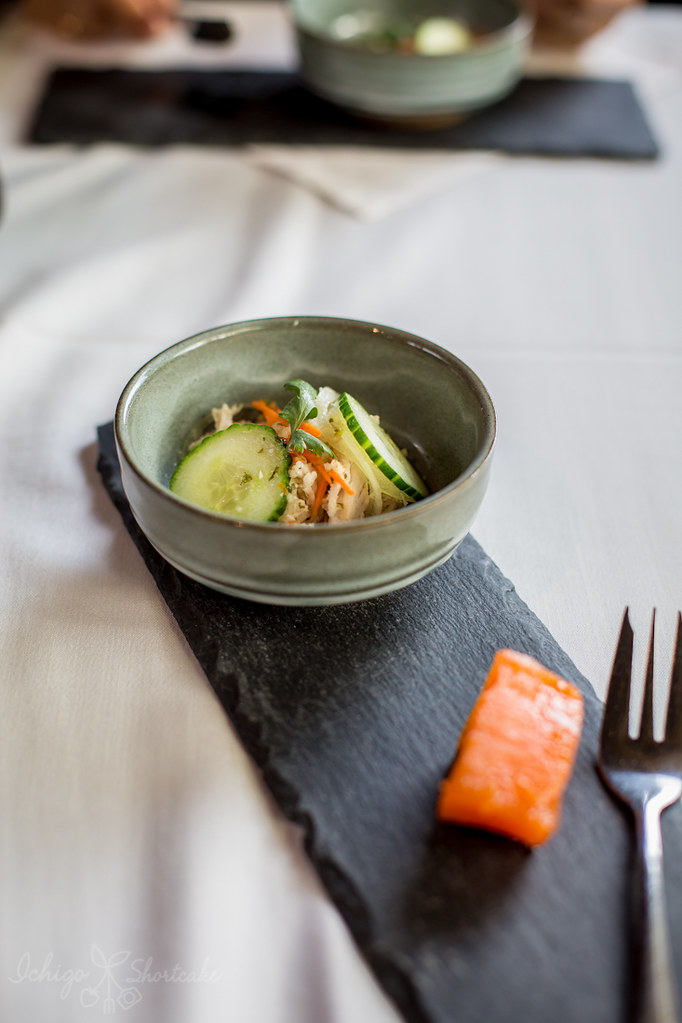 My entree was the wagyu beef tataki with ginger and onion. It was the best entree that day I thought. The beef was very fresh and so delicious. It paired well with the ginger and onion dressing which was umami and a bit sweet. 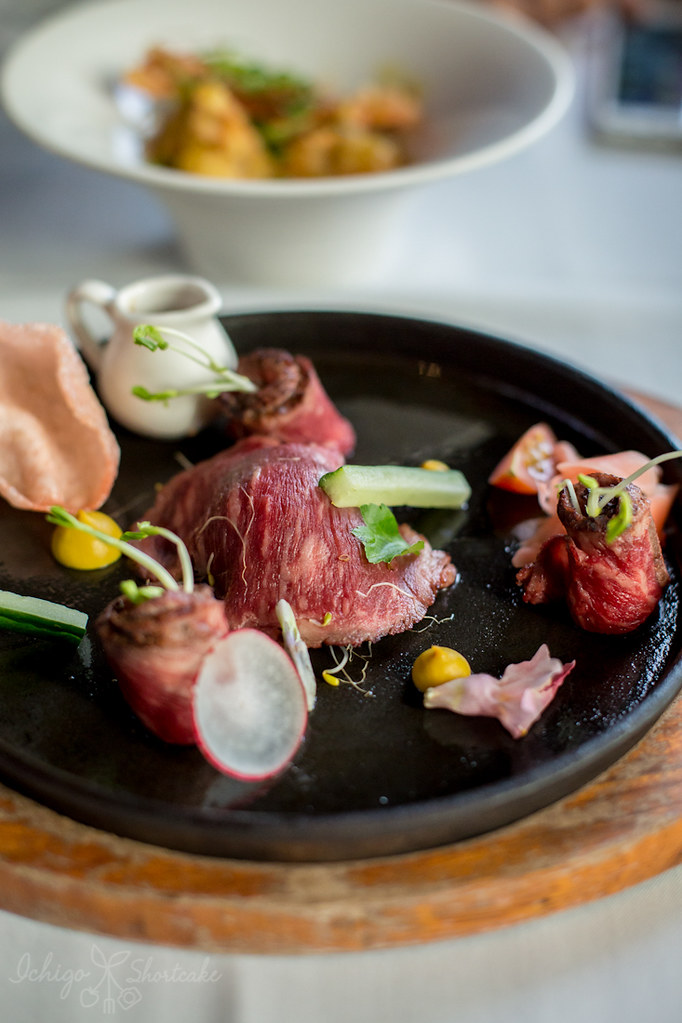 Yuye’s choice was the pork belly shabu shabu with goma sauce. This wasn’t an overly spectacular dish as the pork was a little overcooked and a tad bland. It’s something that anyone can whip up at home, regardless because it was pork belly, we all finished it without a complaint anyway. 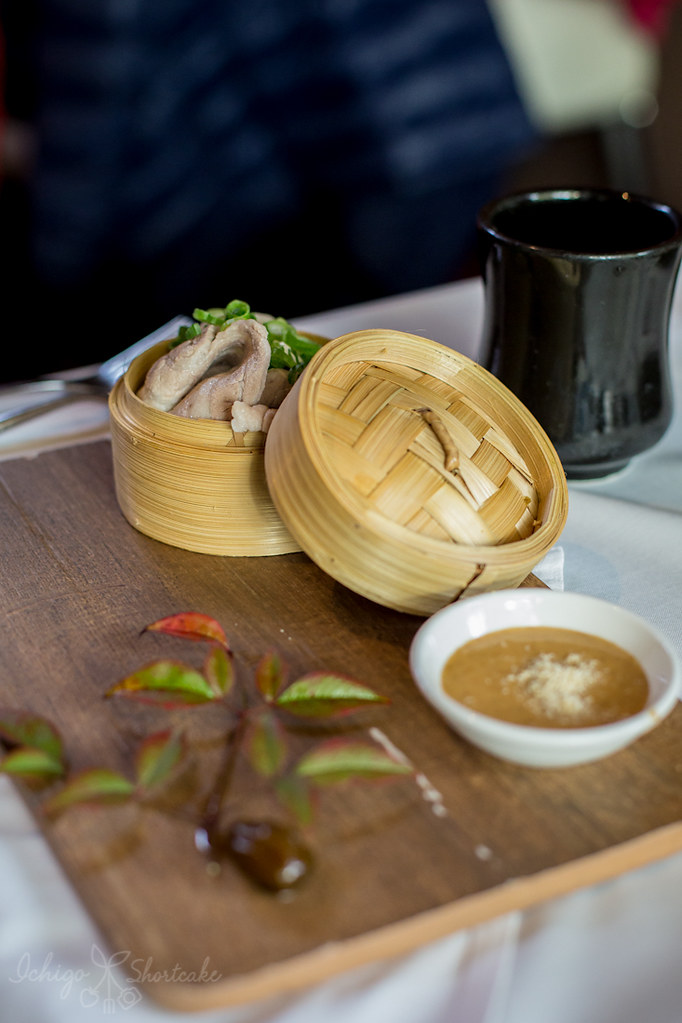 Yuye’s dad ordered the Tao’s style sashimi. It came beautifully presented with various varieties of delicious sashimi including an oyster, scallop and salmon. It wasn’t a big dish so was a bit hard to share. 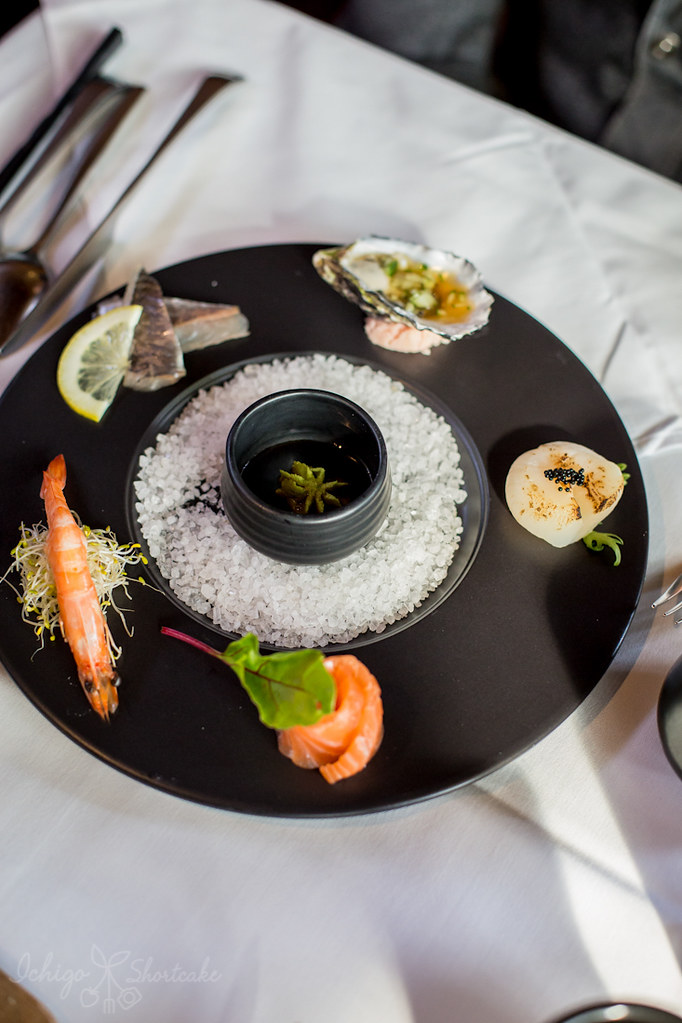 Yuye’s mum ordered the tempura tiger prawn with green curry. The dish came with quite a few prawns and had a sweet, aromatic flavour and was well seasoned. I recommend eating it fast though as it’s a hot dish and the longer you leave the prawns in the sauce, the less crispy it gets. 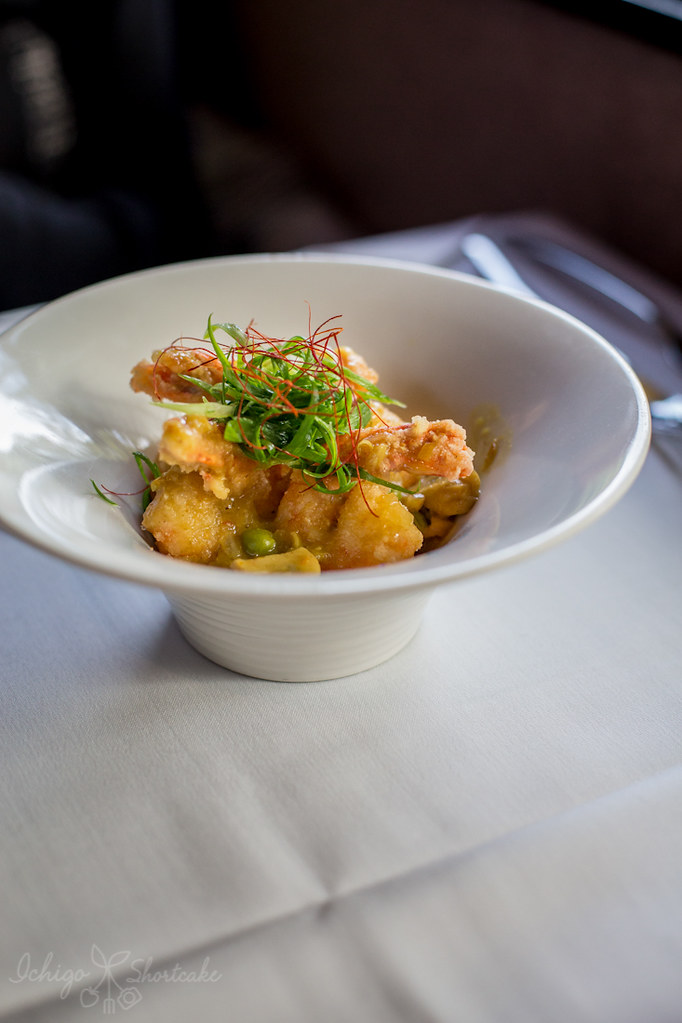 We were quite happy with the entrees but the soups were just average. The soups that we ordered were the cream of mushroom, ginseng chicken herbal and the creamy seafood pumpkin. They were mostly tasty but no wow factor. The cream of mushroom and ginseng chicken herbal were a little bland but I did enjoyed the creamy seafood pumpkin soup as it was umami from the seafood broth. 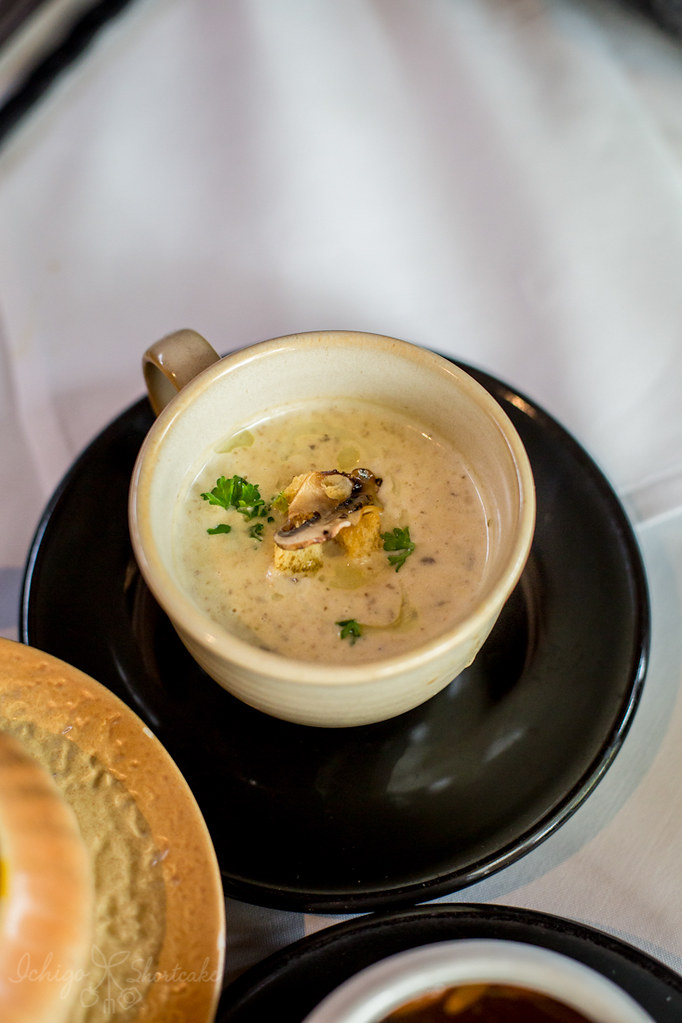 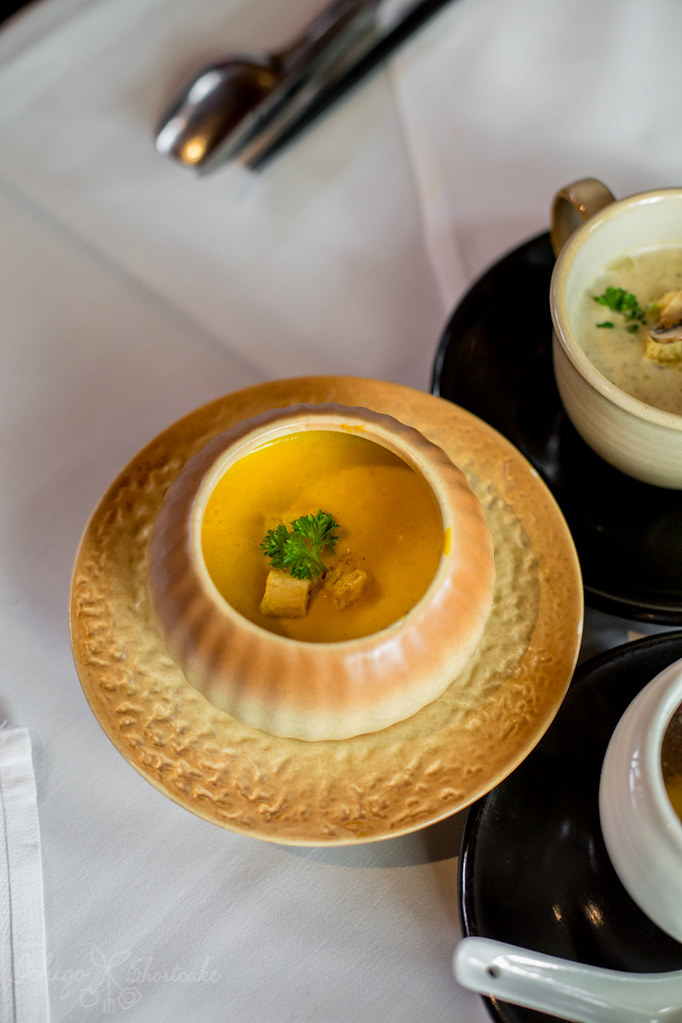 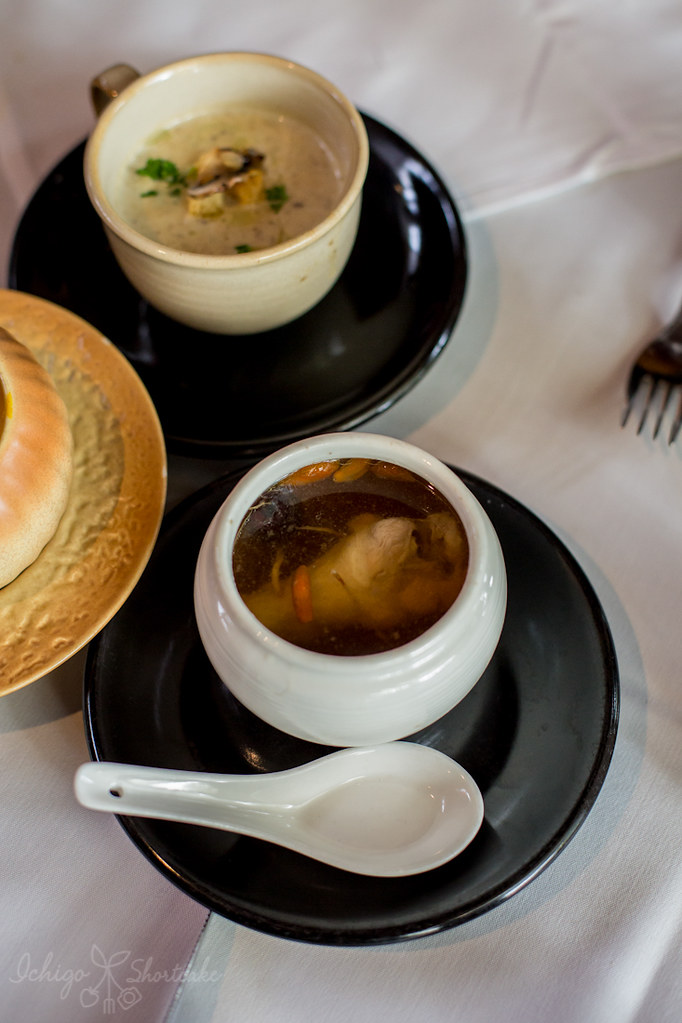 In between the soups and mains we were given palate cleansers – a citrus based granita which was sweet and tangy. 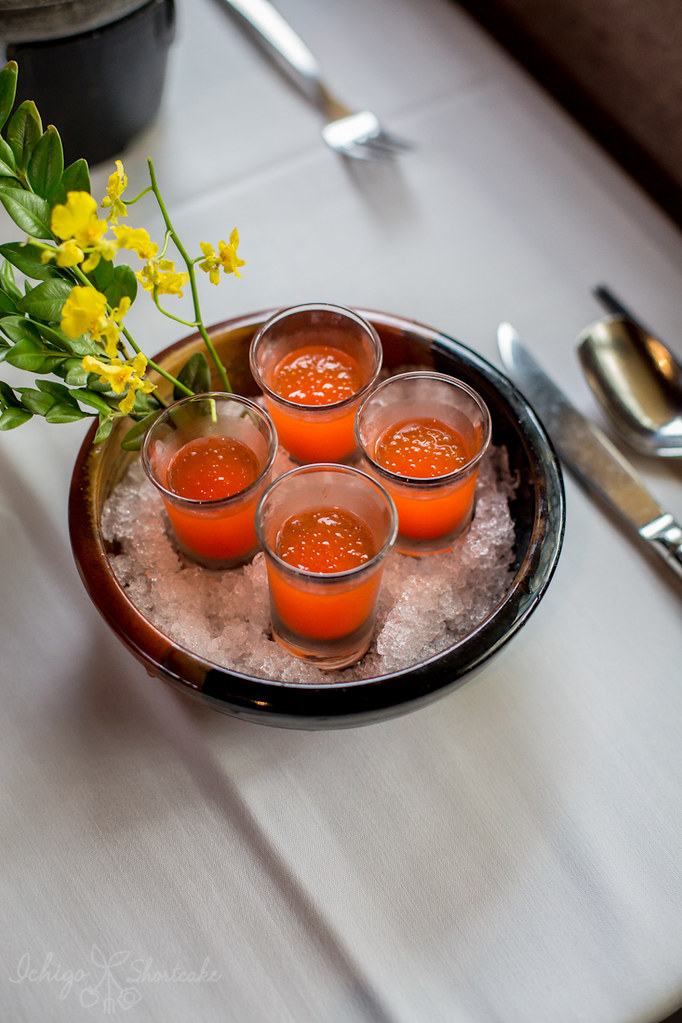 Yuye’s mum didn’t get to order soup as the main she ordered – spicy seafood hotpot (Korean style) – is soup based. At the start, we wondered if it was worth forfeiting a soup dish for but it turned out to be the best dish of the day. The mild chilli soup overflowing with gorgeous ingredients and the umami flavours combining all the goodness from the ingredients was just hard to resist. Coupled with a bowl of steaming rice, it was heavenly. This type of soup is the reason I enjoy Korean cuisine. 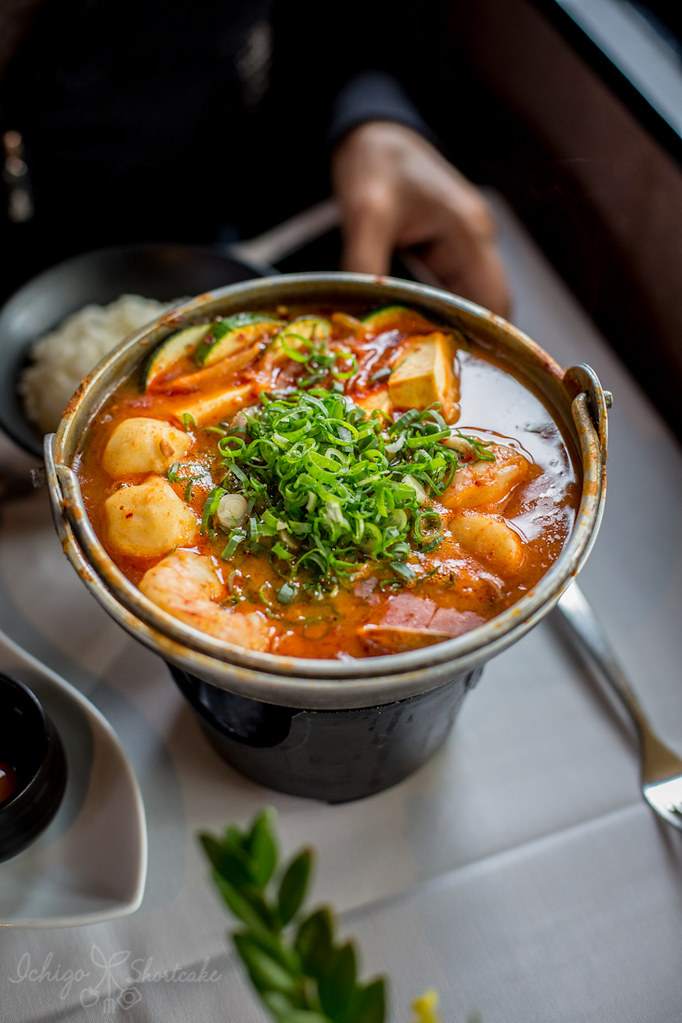 The rest of the mains though were a bit of a let down. My sou vide salmon with ginger and onion was actually quite nice, with perfectly cooked salmon so tender and melt in my mouth (but them sou vide is hard to get wrong) and a slightly oily soy based sauce on top. The veggies were cooked al dente as well which gave it crispness and beautiful colours. 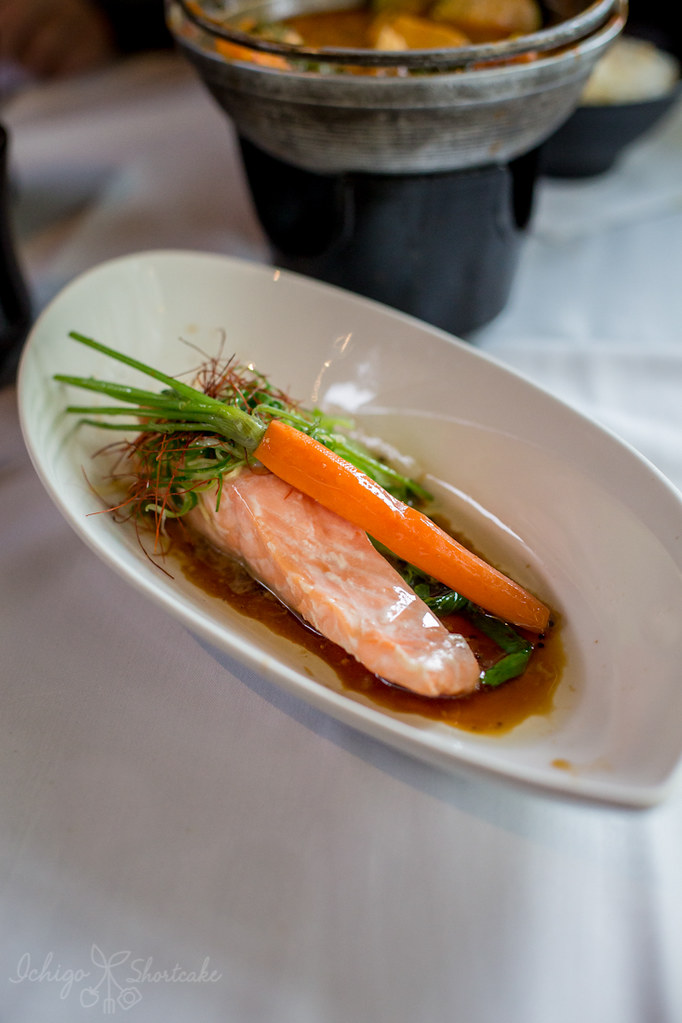 We have figured something out though, they do not do good meats. Yuye ordered the grilled rib-eye with spicy salsa sauce. The meat had been tenderized too much and has completely lost its original meaty texture which is the one big reason why we enjoy steaks. So even if the sauce was nice and paired well with the crispy kale, it just wasn’t a great dish. Instead of tenderizing they should have just cooked it naturally, which of course requires more skill to not overcook. 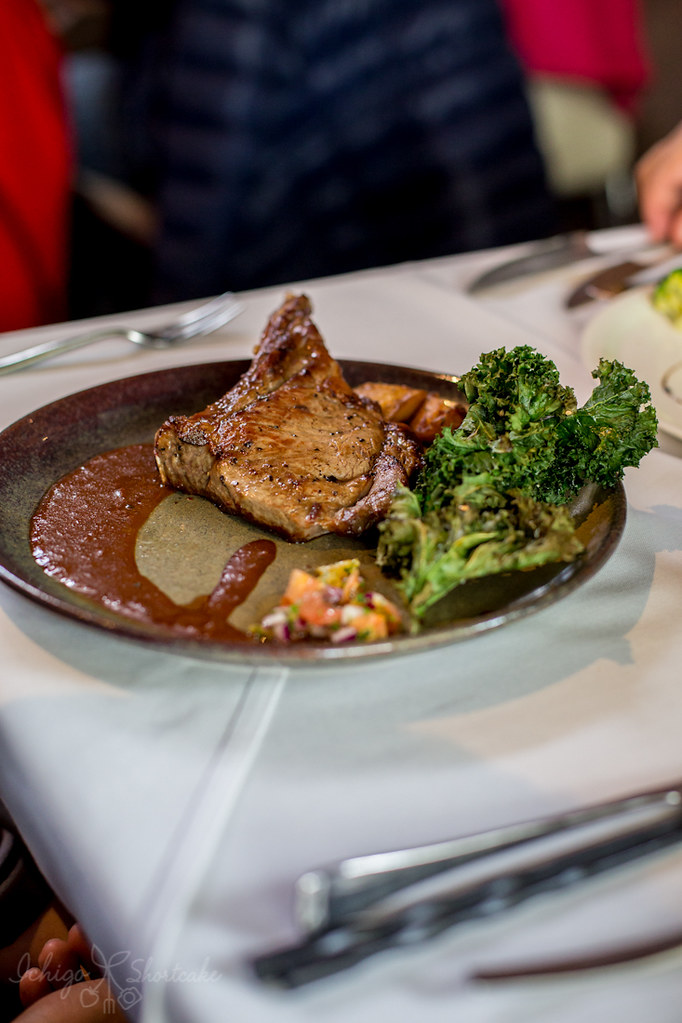 Yuye’s dad ordered the marinated rack of lamb with red wine vinegar. Similar to the steak, it was tenderized beyond recognition, making it texture-less and unappetising. 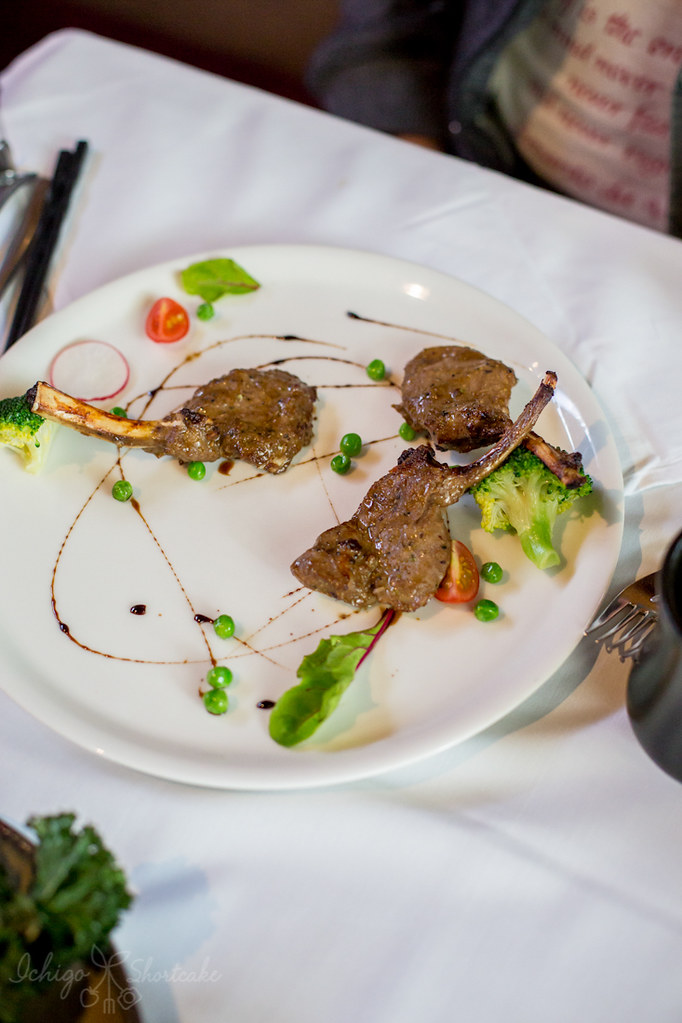 For dessert I ordered black chocolate cake with raspberry. The cake was slightly dense but moist and went well with the tangy raspberry sauce. 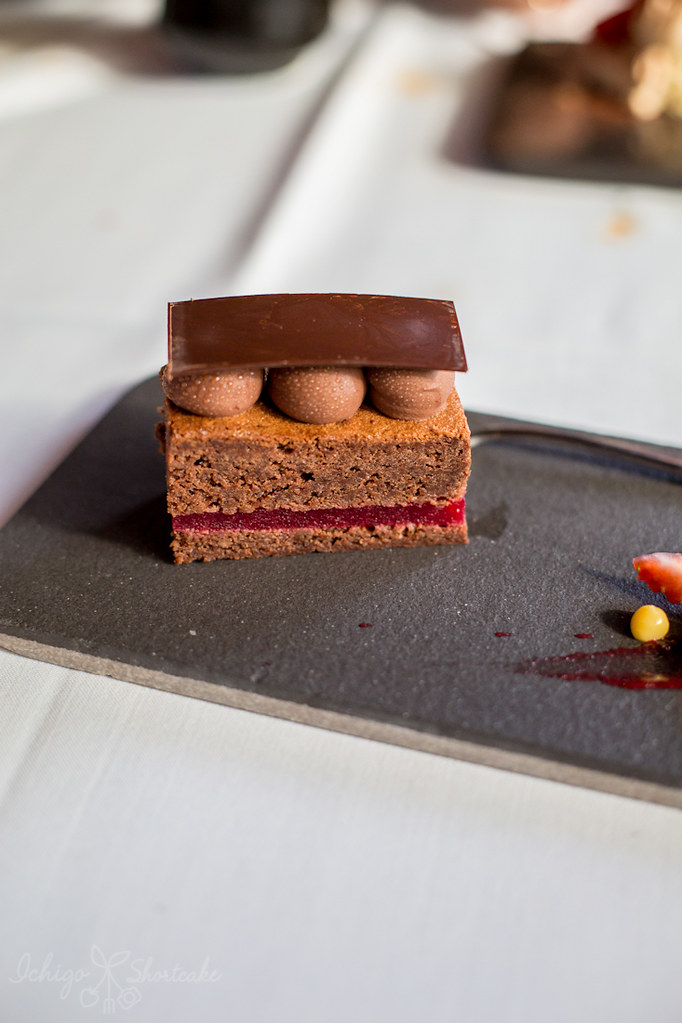 The green tea ice cream with red bean came in a very cute flower pot (it was a real flower pot because the bottom had a hole). The ice cream was smooth and rich in green tea flavour. Green tea and red bean are a match made in heaven so naturally we enjoyed this dish. 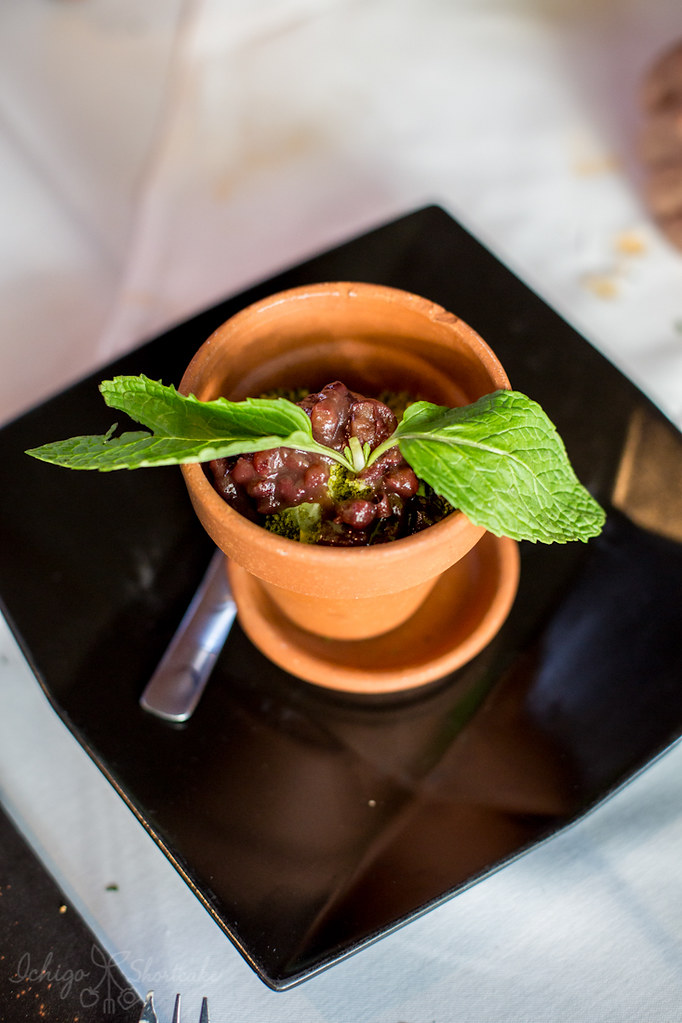 The chai latte tiramisu was interesting. Presented in two components, it was basically a slightly chai flavoured airy bread topped with a mild coffee flavoured cream cheese. It was lighter than I thought which was good. 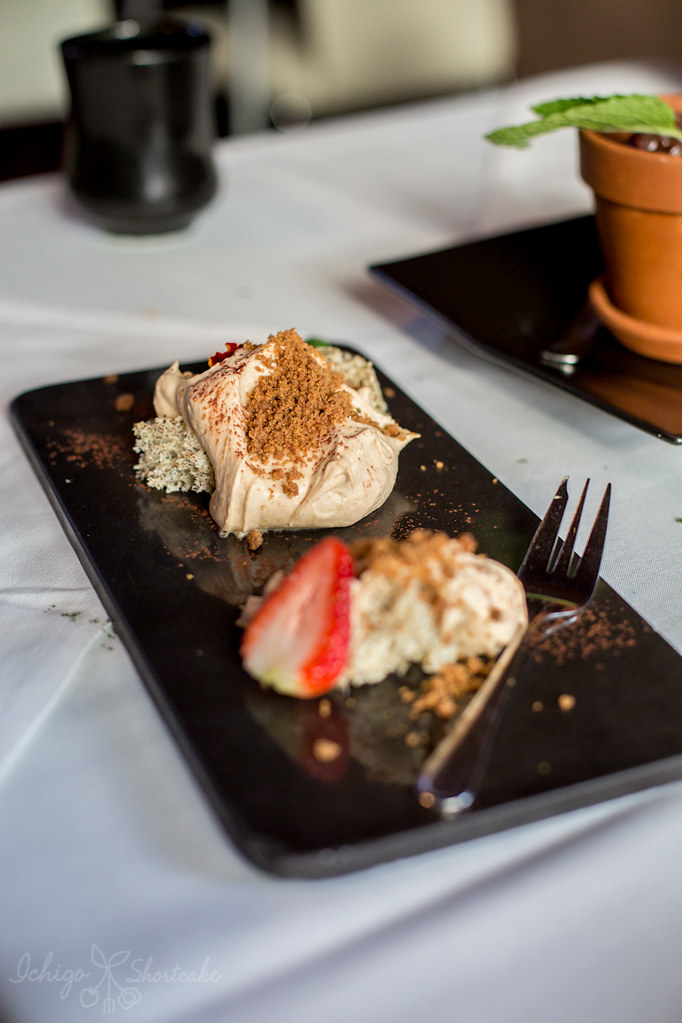 Overall it was not a bad meal, although it was significantly let down by the two meat mains. I also forgot that because it was Mother’s Day, I couldn’t use the Entertainment Card which was one of the reasons I wanted to try it out again. Although it wasn’t an expensive meal for the number of dishes and quality of ingredients we got, the quality of the main dishes made us question whether it was worth the price. If you wanted to go, I suggest staying clear of cooked red meat dishes.

If you have a couple of hours free, I highly recommend going for a stroll in Heidi Museum of Modern Art next door, it’s quite soothing and good to walk off those calories if you plan on dining at Tao’s. I took quite a few photos that day at Heidi which I will be posting up shortly.