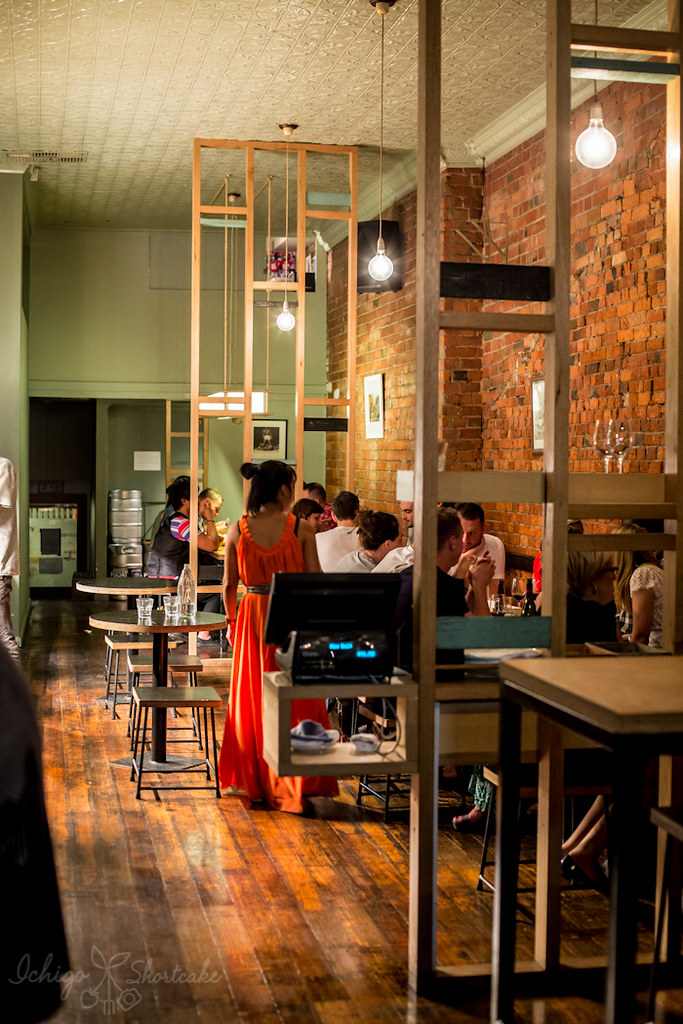 I’ve been wanting to dine at Rockwell & Sons for the longest time but it’s mainly always for their fried chicken. I read on an article one day that their fried chicken was one of the best in Melbourne and is only available on Wednesday evenings.

I did think to myself that surely it can’t be all that good because if it was that popular, they’d have it every night of the week! Still, I craved for it. 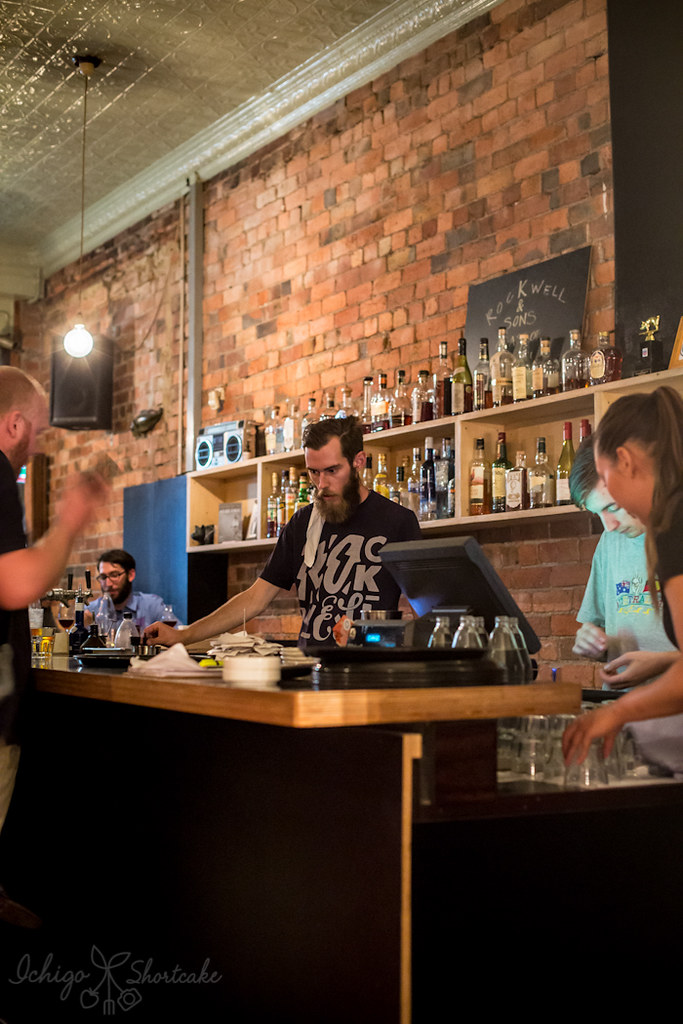 Due to the nature of our work, Yuye and I never really had a Wednesday off and when we did the few times, it was booked out! So I got sick of waiting and decided to dine there on a normal, no-fried-chicken night anyway.

To our surprise, their food was absolutely delicious. Why did we not come here earlier? We have been missing out all these years.

The restaurant is always quite full even late at night. That shows just how popular it is.

There’s not too many beers on tap but my favourite Mountain Goat Summer Ale was there so we were happy. The summer ale is light and refreshing but very tasty at the same time and pairs very well with food as it cuts through the oiliness but doesn’t overpower. This is no longer available as it’s not summer anymore. There are two tap beers on at any one time and this changes as the seasons change. 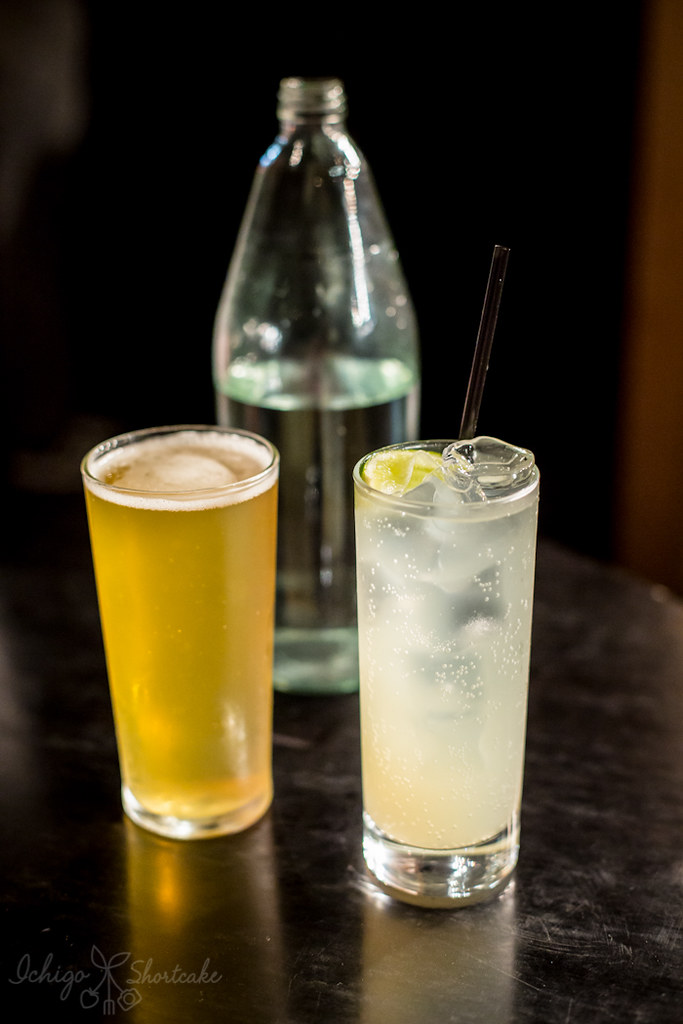 I also ordered the house made lemonade which wasn’t overly sweet and again quite refreshing.

The menu isn’t big by any means so if you go with a group of people, it’s easy to get almost one of each item. The menu though has recently changed it seems, half of what we had which we loved are now gone. I’m a bit sad actually because we loved those dishes and would have kept coming back for them. Anyway, I will write about them just so you get an idea of what kind of food they offer and hopefully if the management sees this post, they might consider bringing some of the dishes back. 😛

The first dish we tried was the cured scallops ($5ea – this was a 2 scallop dish). At the time it was a rhubarb, ponzu, furikake and spring onion dish, now it’s $14 (not sure how many you get) with tiger’s milk, cucumber and coriander. We really enjoyed our ponzu version as it was acidic and fresh, a great way to whet our appetites. 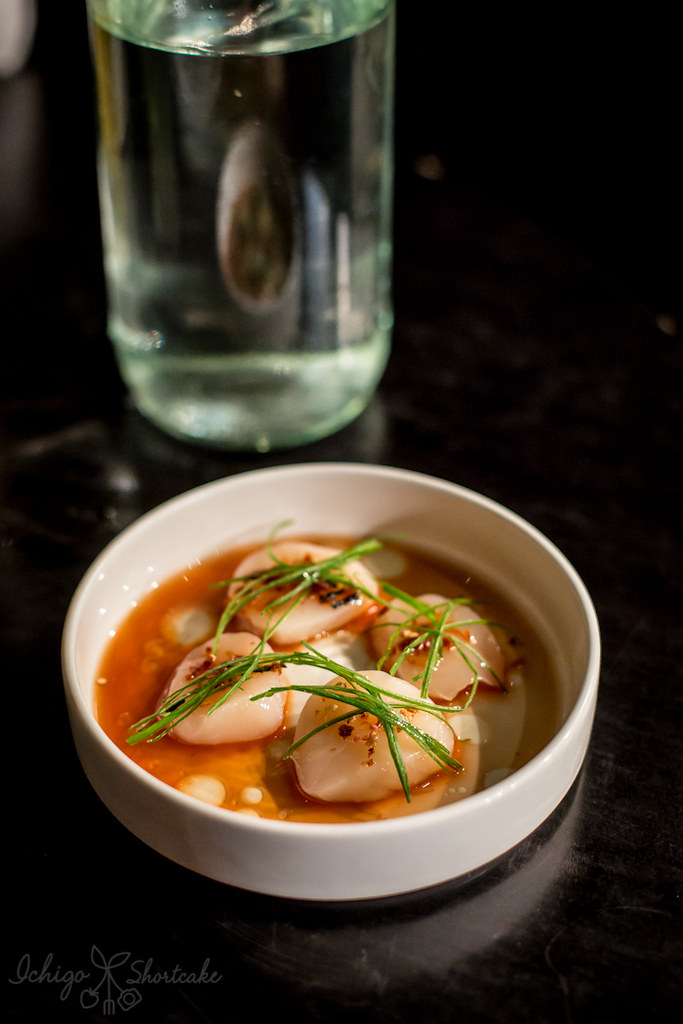 We also ordered the chicken skin crackling ($9) with BBQ salt, butter and onions. This was such a fantastic dish too which is now also not on the menu. I wonder what they do with their chicken skins now? It was a little oily and heavy but boy was it tasty. I wouldn’t mind a little bit of cholesterol for a delicious crunch that skin gave. Oh well… 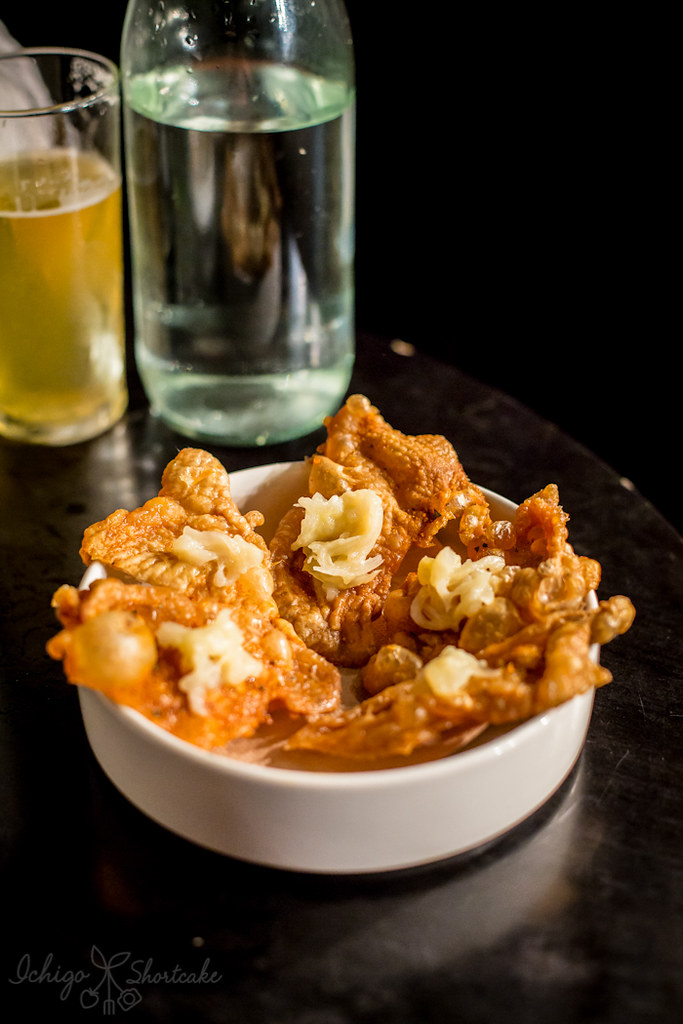 Again the buffalo-style crispy pork hocks ($15) with carrot, celery and blue cheese was also removed from the menu. It was a heavy dish but would have been great as a sharing plate between a few people with a bite or two each. The sauce was slightly tangy and the meat was so tender. 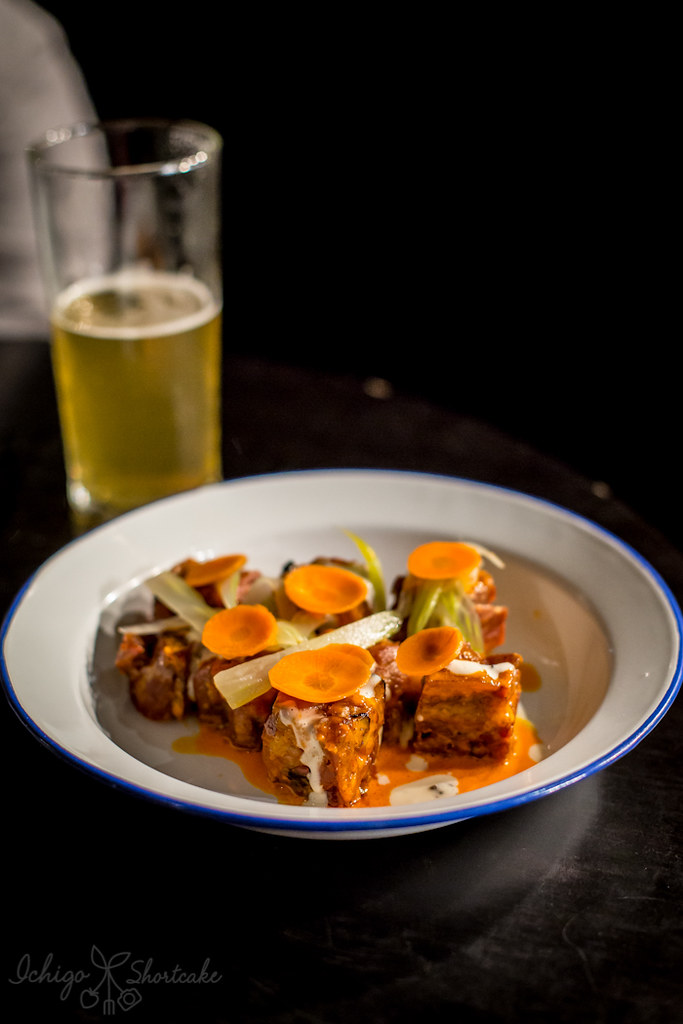 The smoked lamb ribs ($14) with Kentucky black BBQ sauce is thankfully still on the menu. It’s very well fat-rendered so the outside is crispy. It does need a little more sauce though as the sauce really makes it shine and there’s just not enough of it to coat the whole rib, leaving us fighting to lick that bowl… 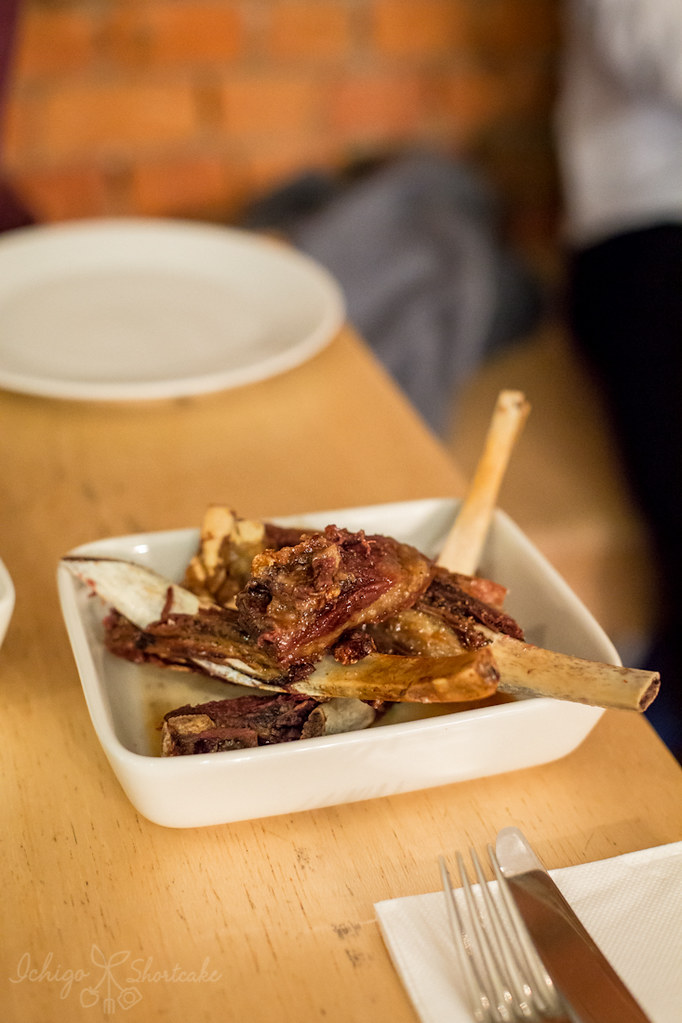 You would of course come here to eat their burgers because they are just fantastic. I love their double patty smash burger ($11) and is our must-get when we dine here. Their new menu though no longer shows the option to add crispy bacon (extra $4) which I am very surprised with as we absolutely adored the burger with the bacon. Our friends who have tried it did mention that the crispiness of the bacon somehow doesn’t go well with the soft bun and patties so perhaps we were the only ones who loved it? Regardless, the patties are very well done, just pink inside and so juicy it would leak all over your hands. 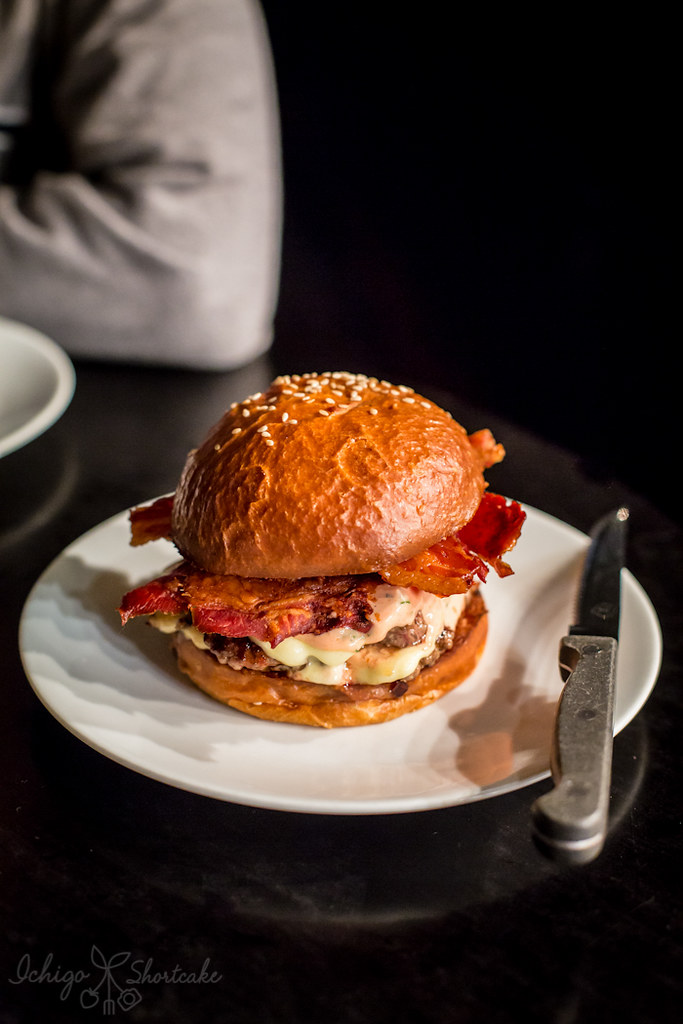 I’ve found the amount of pickles they give you though is inconsistent. On one occasion I hardly found any in my burger and on another it was full of it. More pickles are always better though in my opinion as they cut through the oil and heaviness. 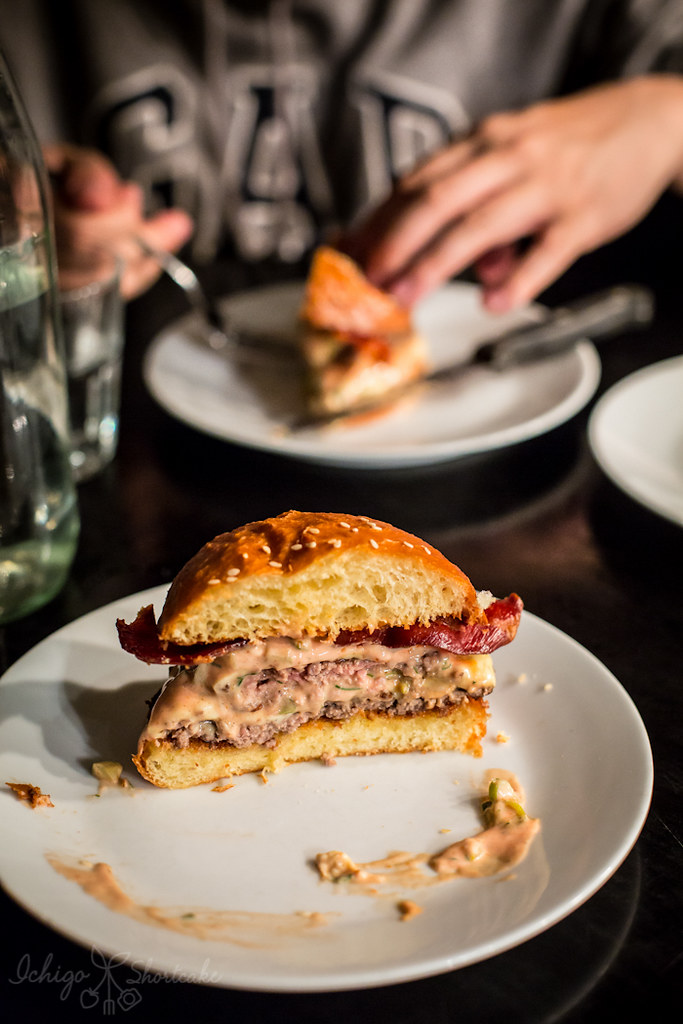 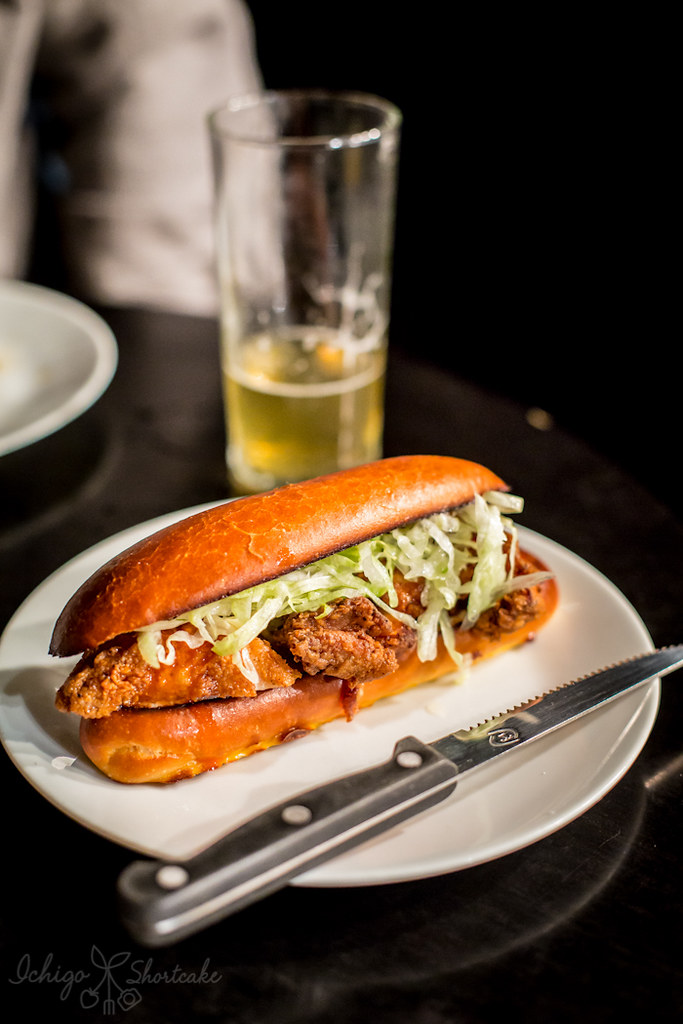 Our favourite sides are now gone from the menu too. We had tried their tater tots ($9) which are basically cheesy potato gems. Yes they were just potato gems but they were delicious. 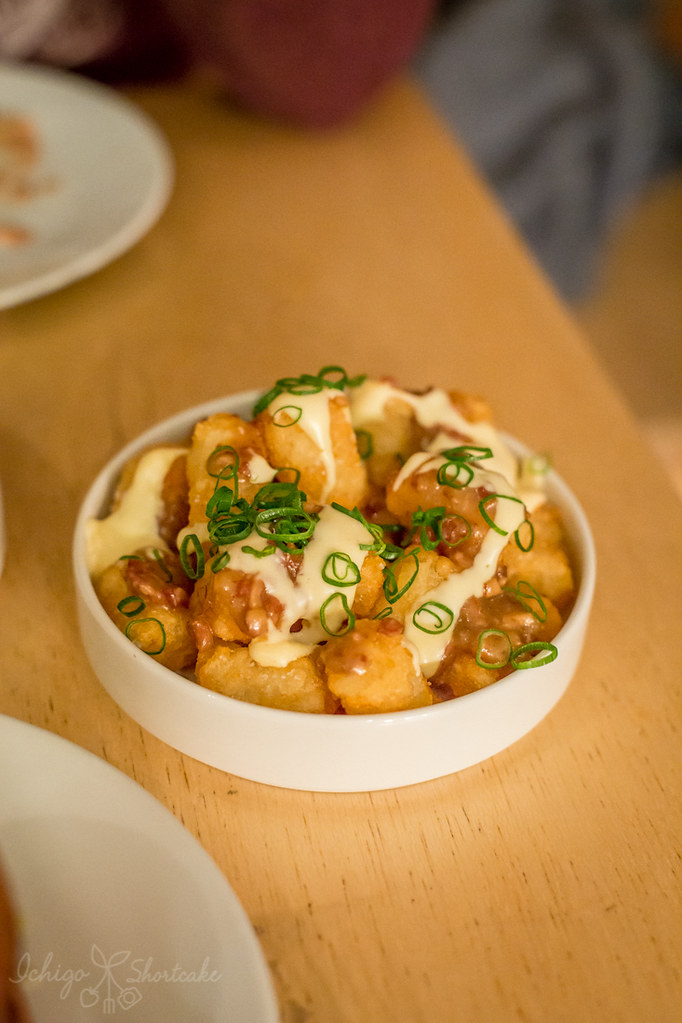 They went so perfectly well with the slightly salty BBQed corn and chorizo ($8) which I will miss a lot. Not sure why they took this off the menu, it was so good! It was made with basil, Ancho chile and salted ricotta. It was SO umami…I think I will try to make this at home. 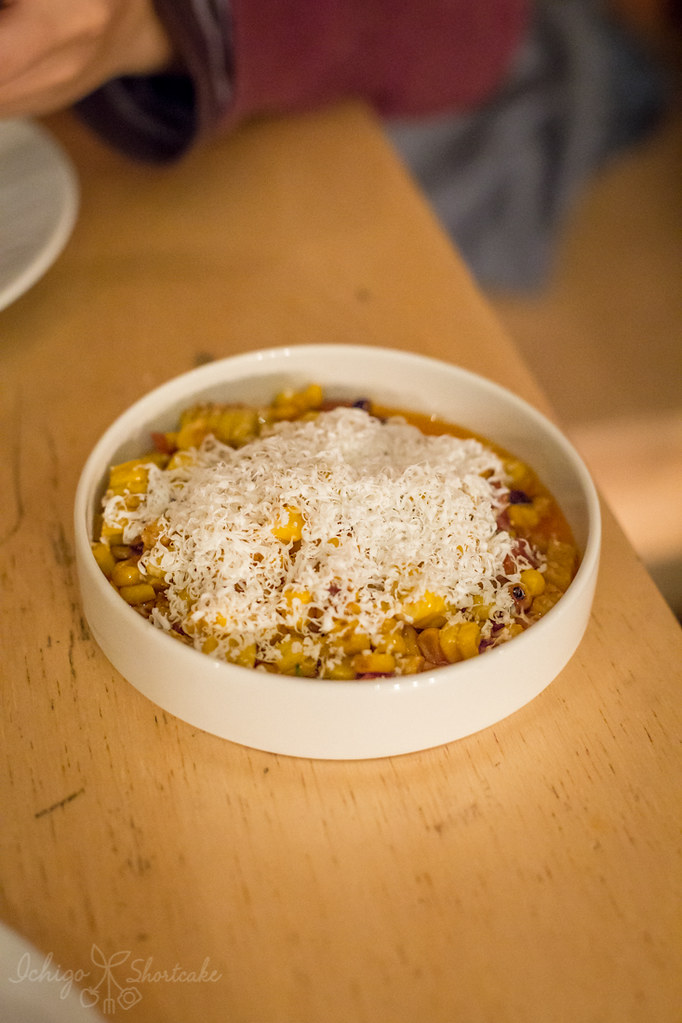 That are all the things we tried from their regular menu. For those of you who like fried chicken, Rockwell and Sons also offers a fried chicken night every Wednesday. You MUST make a booking though and it took us almost one month to get a table (we booked a table for 11 though, smaller tables will be easier to book).

The cost is quite high for fried chicken but you walk away essentially paying about the same as a regular meal here.

A whole chicken costs $60 and comes with 8 big pieces of freshly fried chicken and 4 sides. When you make the booking, you book the number of chickens you want as well. It’s recommended to share 1 chicken between 3-4 people, which averages about 2-3 pieces per person. If it’s not enough food, you can always order from the regular menu as well. 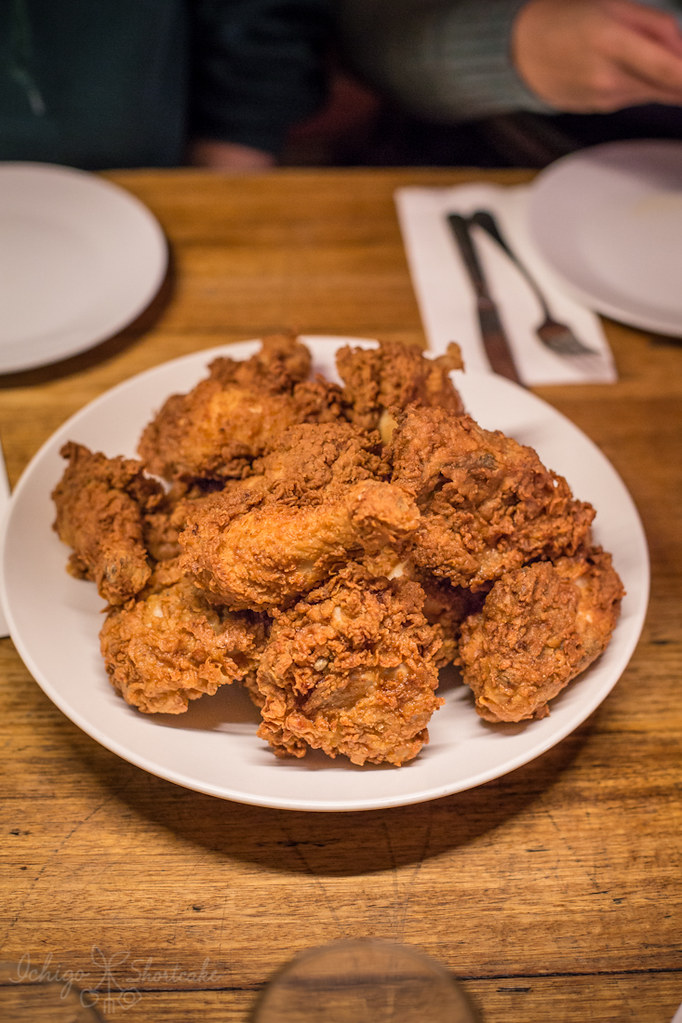 We had to wait quite a while for our chicken because I think there was only two friers and they could only do two chickens at any one time. With the number of tables orders chickens, this would have been a problem. I think that’s why they gave us deviled eggs to start off the meal with so we don’t get too hungry and complain. I’m not sure if I liked them that much though because the filling had an overpowering mustard taste. 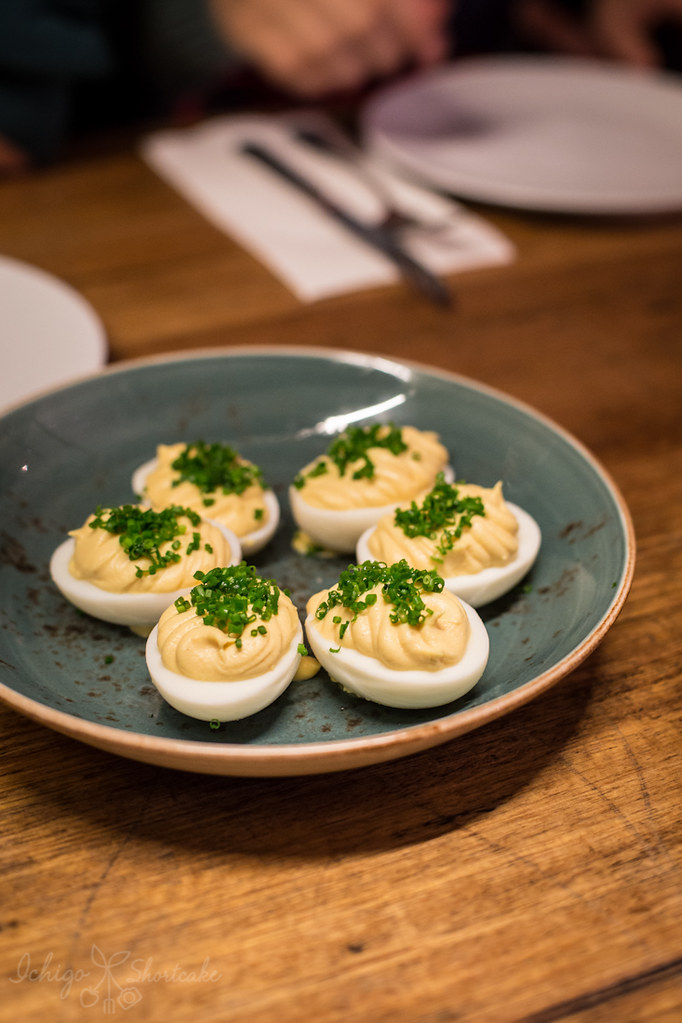 The meat of the chicken was so juicy and tender but unfortunately we all found the chicken to be too salty. So salty that we were all looking for something refreshing to even it out.

It was a shame that the coleslaw side was also very salty, which was a little strange for coleslaw. I’m more used to the slightly sweet and creamy variety. 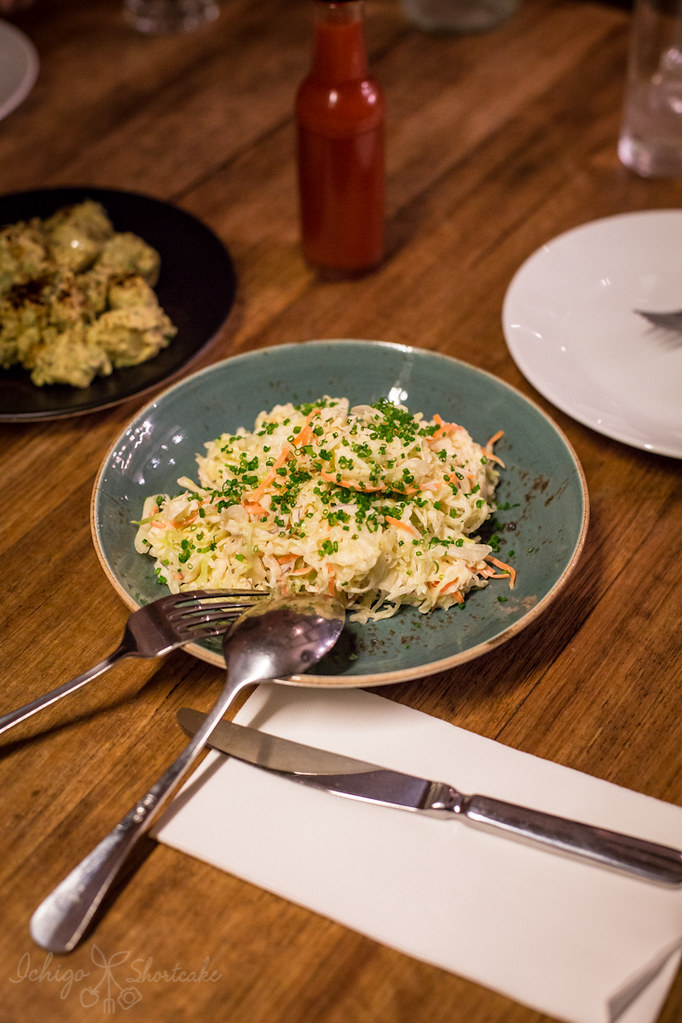 The pickles were great though as they cut through the heaviness and the sour taste smoothed out the salt a bit. 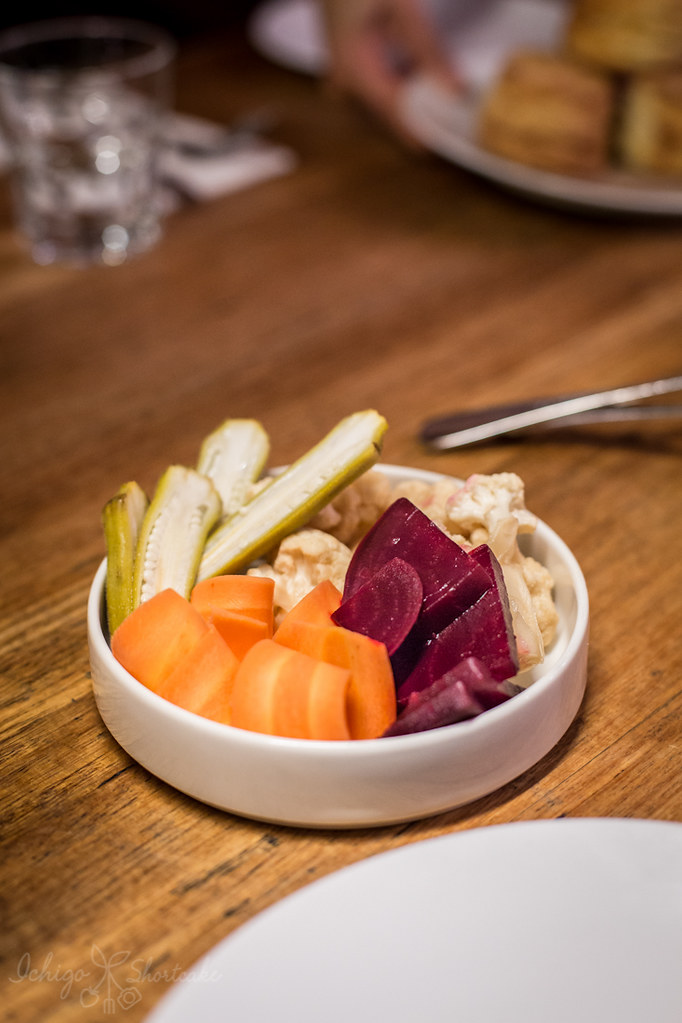 The potato salad was creamy and tasted strongly of mustard. Again it wasn’t refreshing enough to pair with the chicken. 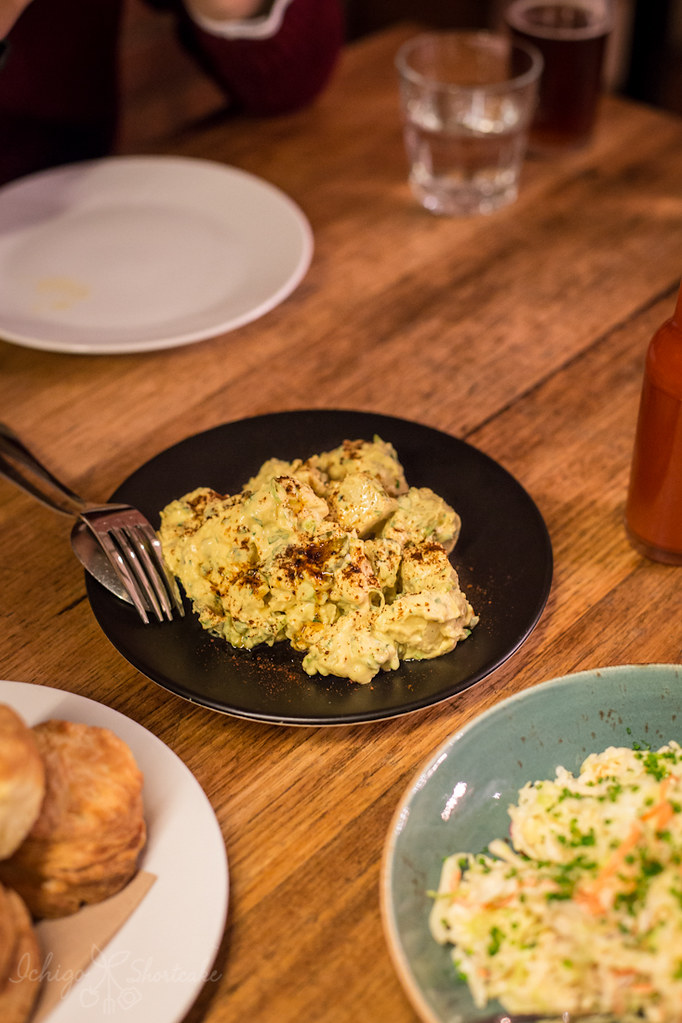 The butter bread was fantastic. Each person only got a small part of a bread (2 breads per chicken) which I thought wasn’t enough because it was so buttery and delicious that we were practically fighting for them. It was quite filling though so I don’t suggest filling up on it since you’re there to eat chicken, perhaps that’s why they don’t give you as many. 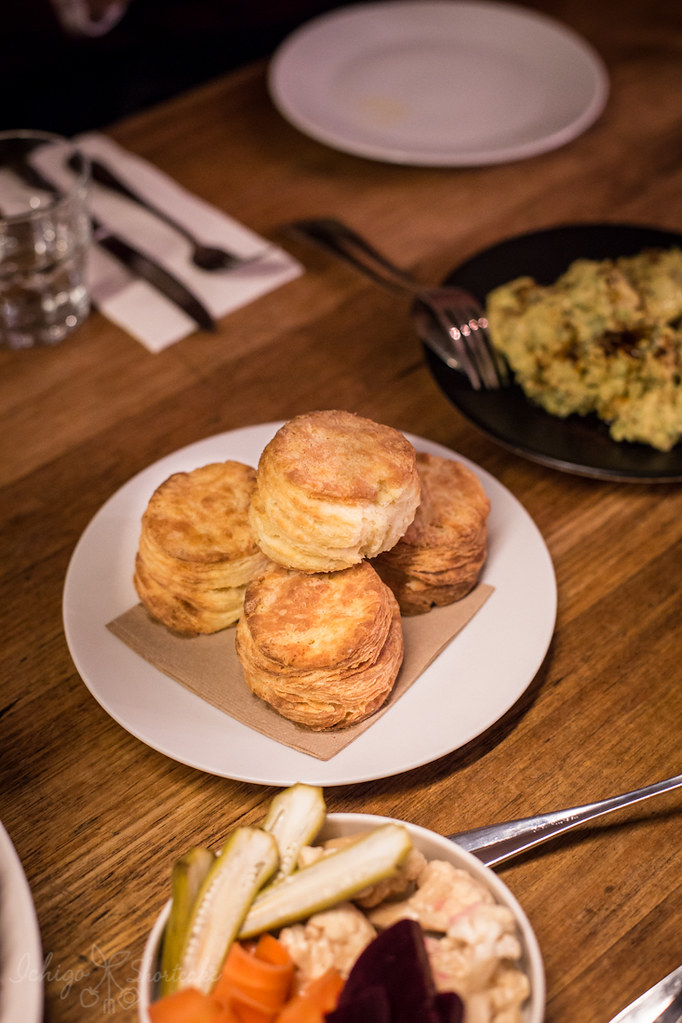 Overall we still enjoyed the chicken. If it was less salty they would have been perfect but alas they were too salty for most people. I would recommend dining here to eat from their regular menu over eating the fried chicken, especially when you have to book such a long time beforehand and it’s only available on a Wednesday.