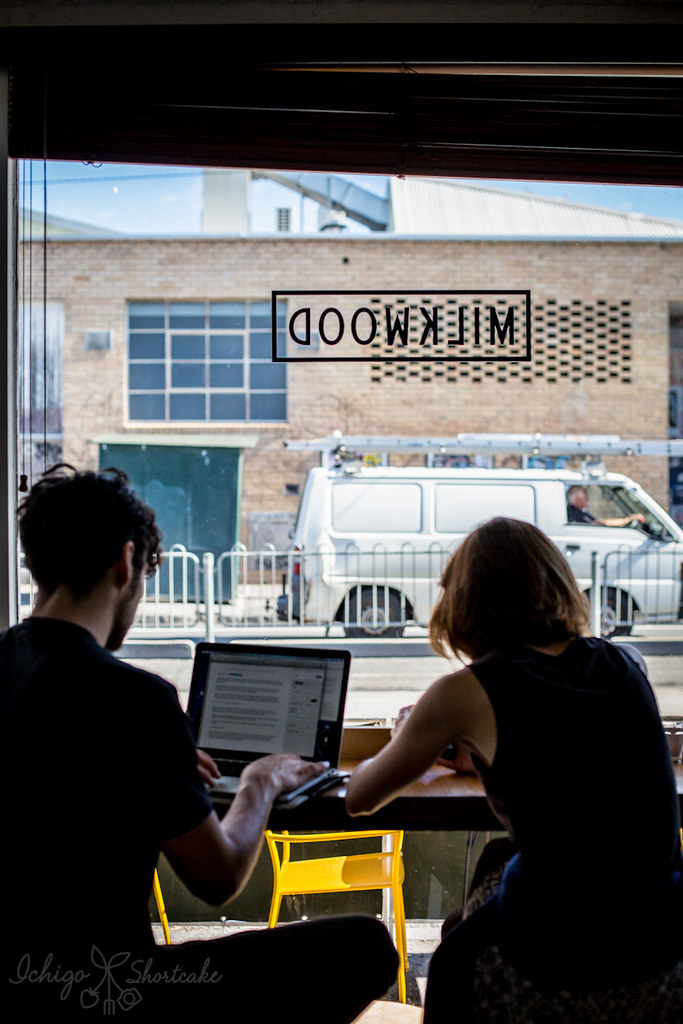 Have you ever made plans and then suddenly changed your mind because you saw something more interesting on the way there?

Yuye and I were driving back from the airport to brunch one day and I had decided to go to Industry Beans in Fitzroy when all of a sudden Yuye yells out “stop the car, there’s a cafe with lots of people queuing up right there”.

I usually wouldn’t stop just because I like to do my research before dining at a place but that day I was feeling adventurous. 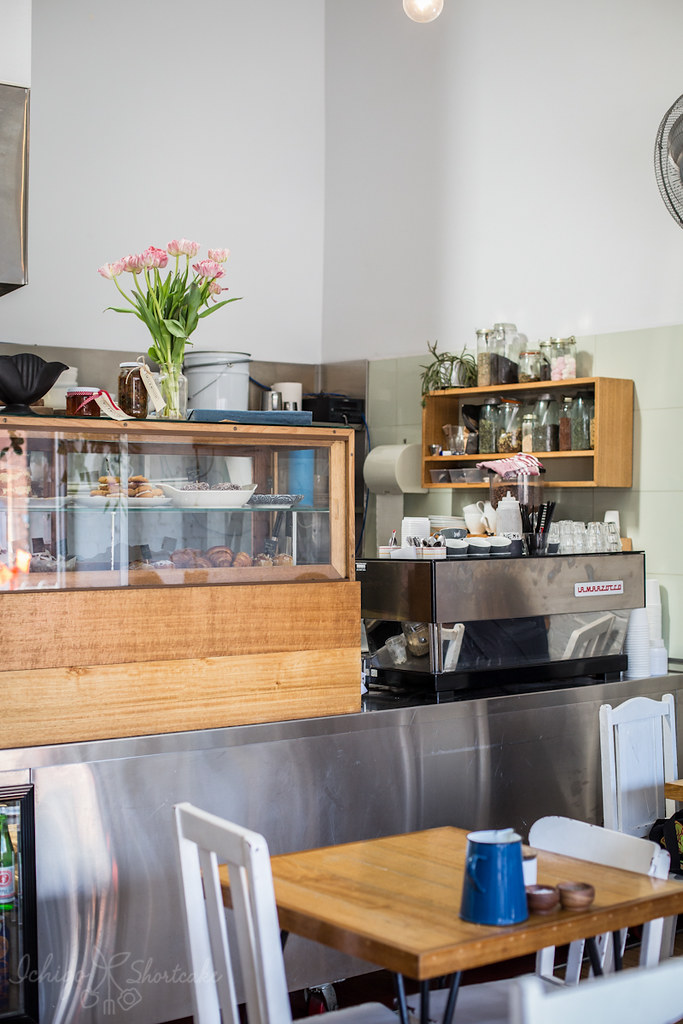 A u-turn and park later, we arrived at Milkwood, a small cafe in Brunswick East. ‘This better be a good investment’ I thought to myself and thankfully didn’t have to queue as there were tables free inside. 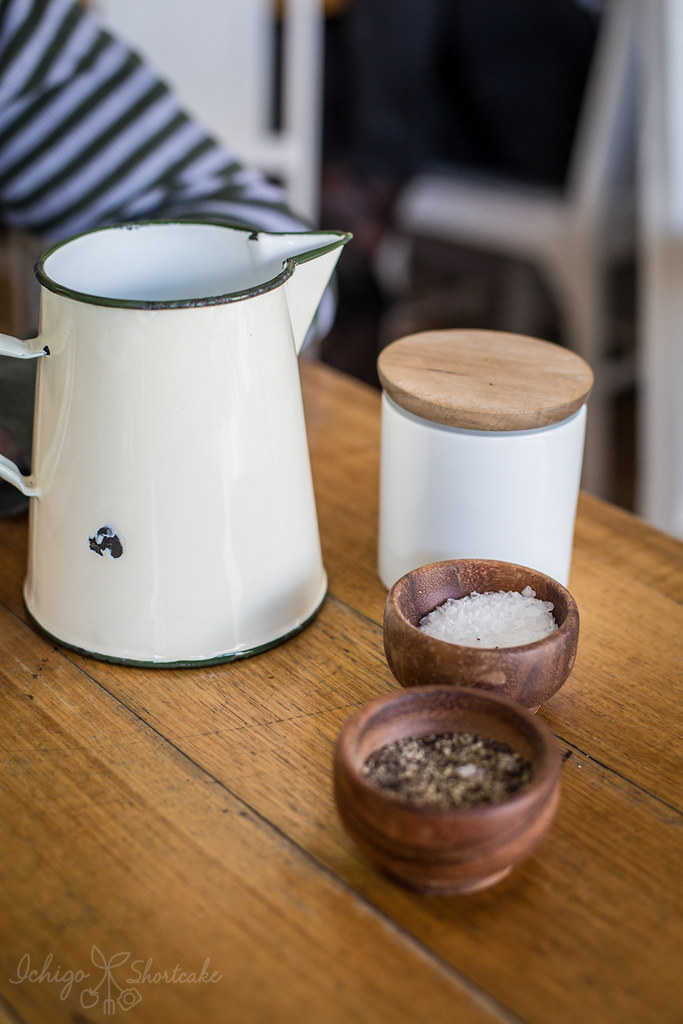 It was a hot day so diners chose the outdoor dining option to get a bit of that rare sunshine now that the weather turned wintery all of a sudden. Can you believe it? It was 15 degrees the day before and then it was 28. Now as I’m typing this post, it’s pouring down outside and windy. Ahh the wonders of Melbourne. 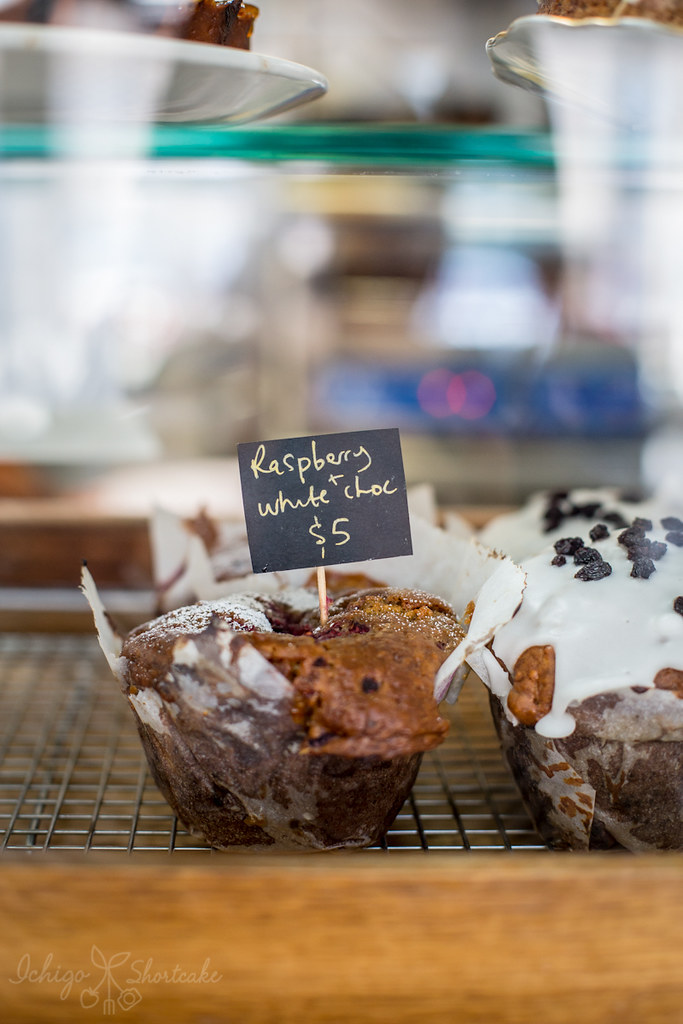 The menu here’s not too big with straight forward choices like baguettes and salads as well as breakfast choices. If you’re not keen on any of the pre-arranged dishes, you can always choose the basic poached eggs on sourdough ($8.50) and add your own toppings all for around $3.50 – $4 each.

Yuye decided to order the pea, mint and broad bean smash served on garlicy sourdough with poached eggs and pecorino ($15) along with an extra serve of smoked salmon ($4.50). The dish was HUGE. It came on two pieces of quite large sourdough and on it was the smashed peas spread out as well as two eggs. 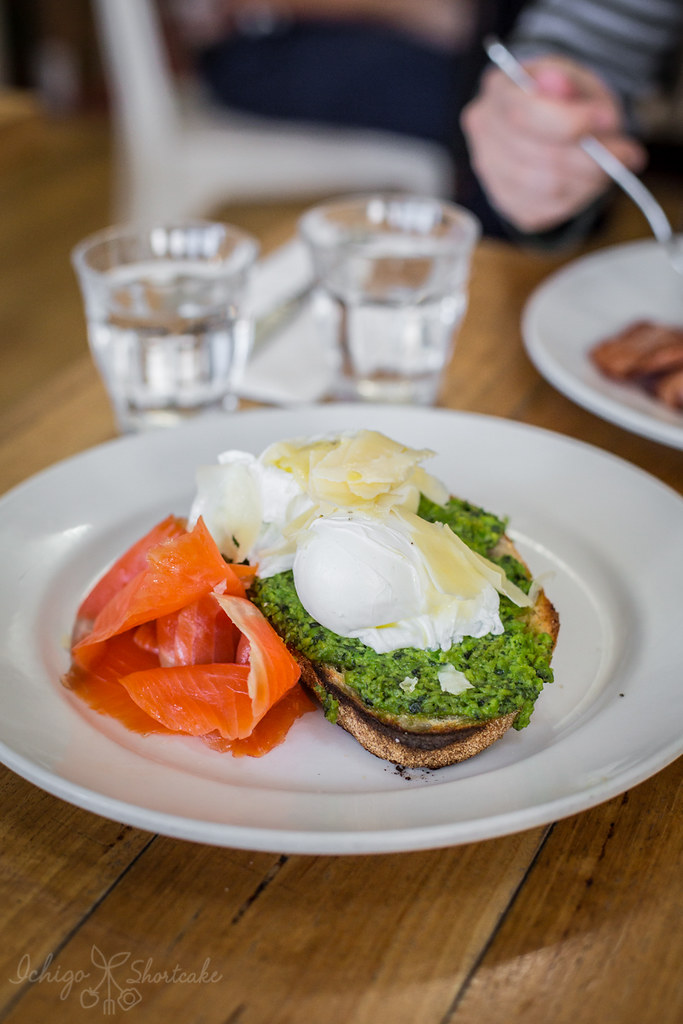 The smash was quite minty and refreshing and served warm. With a small squeeze of lemon juice, it was a great start to our morning. The poached eggs were cooked perfectly as well with gooey runny yolk dribbling into the smash.

The smoked salmon was a nice addition to the dish as it added a nice depth of flavour and it wasn’t too filling either. 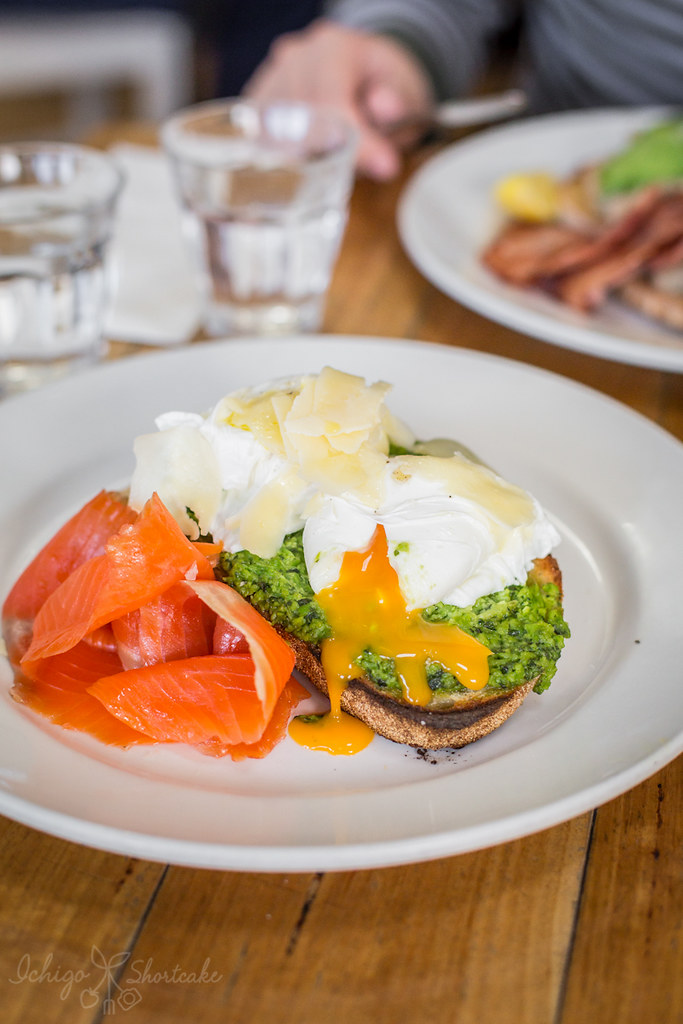 I ordered the warm cannelloni beans on toast with garlic rosemary, avocado and lemon oil ($14.50) with an extra free range grilled ham off the bone ($4.50) on the side. This dish was even bigger than Yuye’s as the beans made it very filling. Even without the eggs, we struggled to finish the two dishes. In highlight, if I had known the dishes were that big, I would have ordered the field mushroom on toast instead (or maybe that’s huge too?)

It was also very sour, more sour than Yuye likes his dishes but I thought it tasted quite nice and the sourness cut through what would have been a bit too heavy. It didn’t really need the ham because it was a big enough dish. I did think the dish wasn’t as refined as I liked. 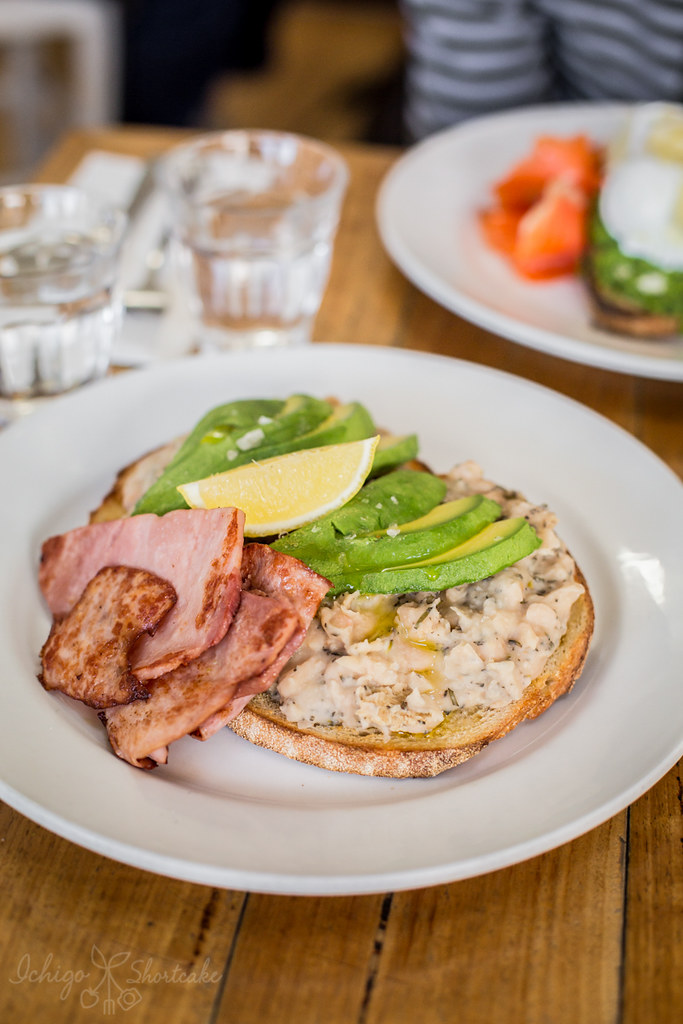 The coffee was smooth with a hint of acidity and toffee notes. I’m always a little sad deep inside when my coffees come with no art but it’s the taste that matters, I know that! *sulk* Ok I’ll try to quit being such a little kid…but you know…:( 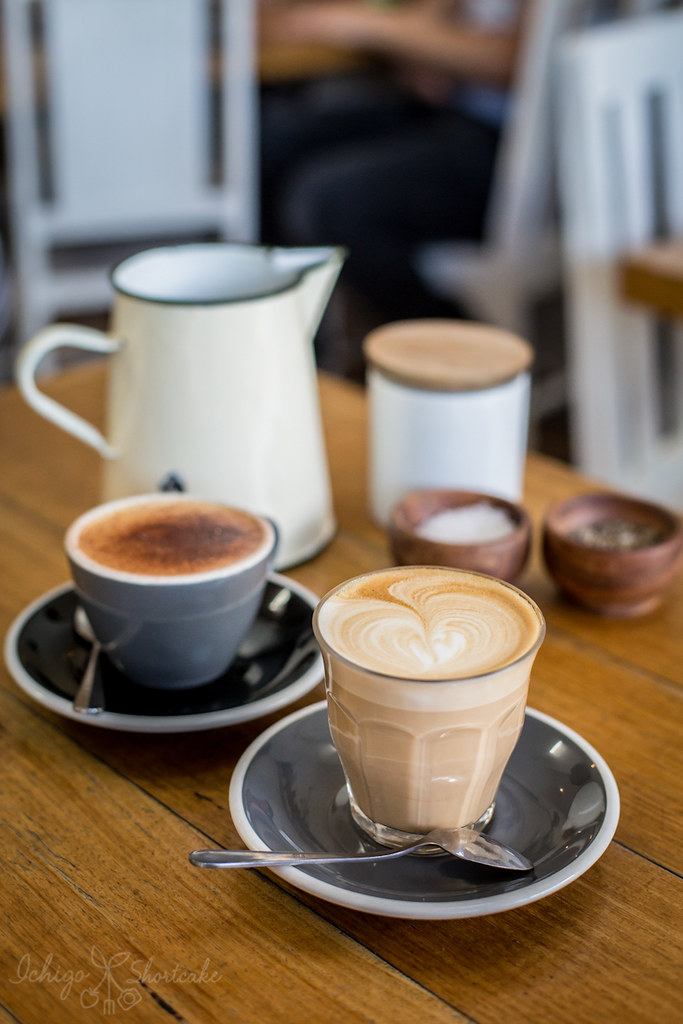 Milkwood has two shop fronts side by side and the toilet is in the right most one. Obviously business was getting too good so they decided to expand next door too.

Overall we had a good experience here although found the food to be a bit unimaginative and simple but quite substantial. The carbiness might be because we ordered two similar dishes. I suggest you order two different styled dishes if there’s two or more of you so you can share the carbs around.

Question time: Do you usually like to be adventurous with picking where to eat or do you do your research beforehand?