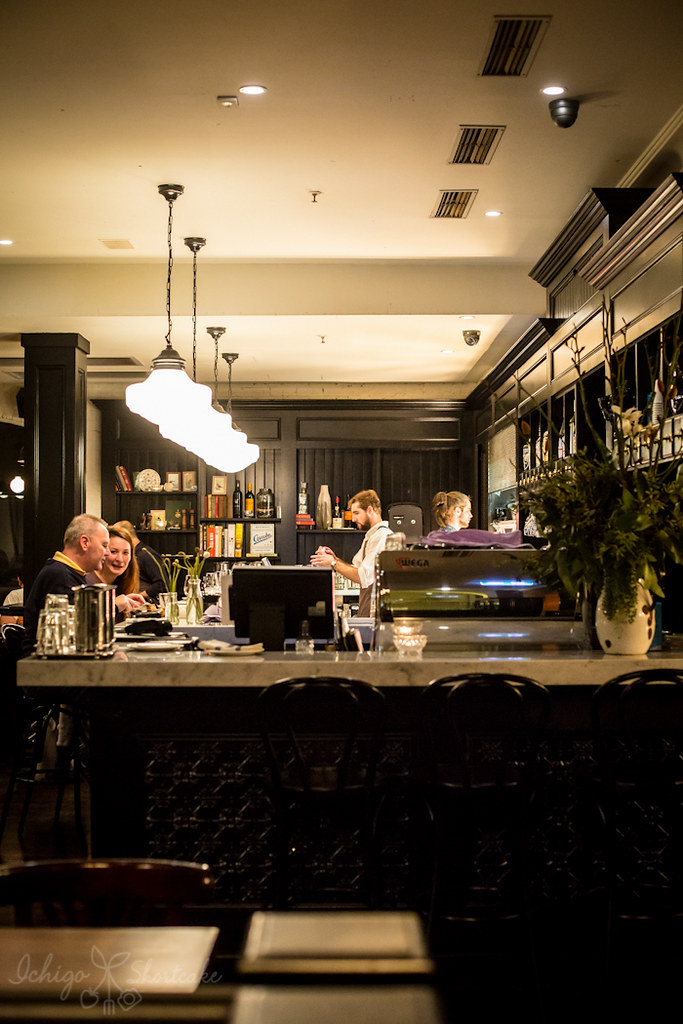 For those who are geographically and historically challenged like myself, you might think Nieuw Amsterdam served traditional Dutch food. Nieuw Amsterdam means ‘New Amsterdam’ in Dutch and refers to a 17th century Dutch settlement at the southern tip of Manhattan Island in the USA. It was later renamed to New York and there’s no confusion about what that is I’m sure. But did you know why it was named New York? It was in honour of the then Duke of York after the English took over the area.

So in essence, Nieuw Amsterdam is American food with Dutch influences. 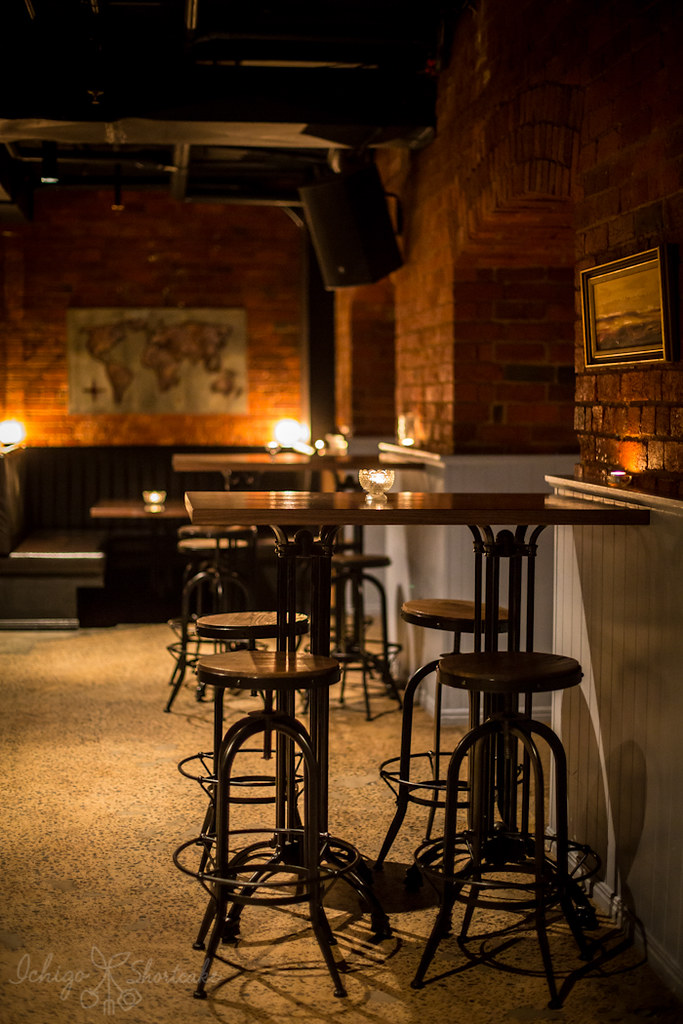 Either way, it doesn’t matter what type of food it is, all I know is the food and drinks were simply delicious.

It took us a while to finally visit because every time we wanted to go, there were more than 5 people which required a booking and supposedly people had to choose the degustation ($50pp). Finally we decided to give it a go anyway.

It turned out that we could order a la carte. 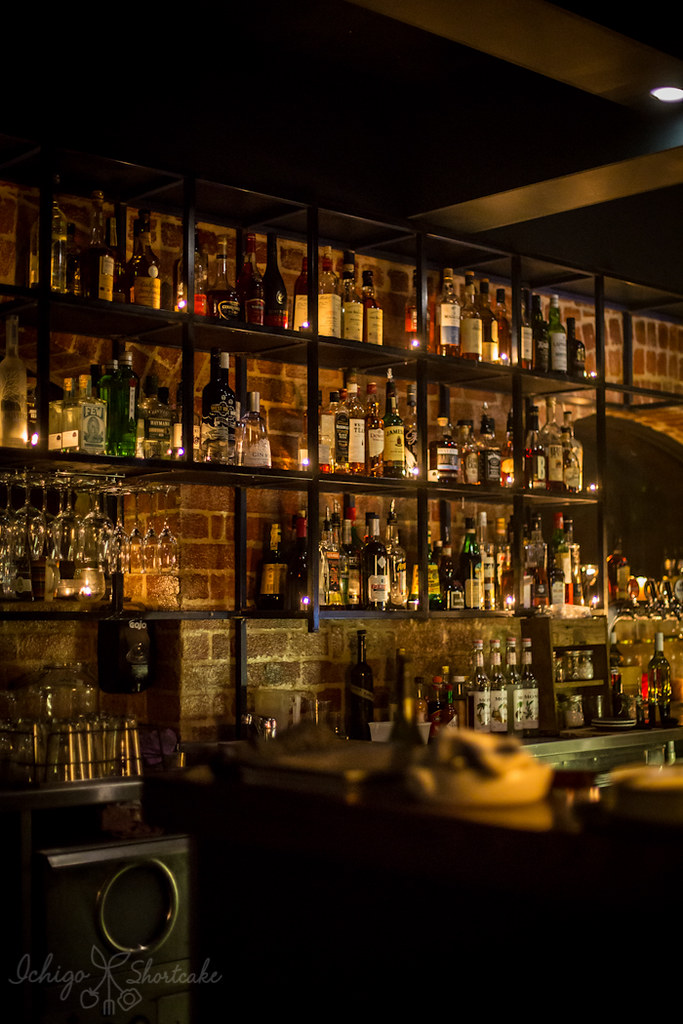 The restaurant is pubby, dark and quite atmospheric, although it wasn’t great for my photos.

We were seated downstairs because upstairs was fully booked out. To my surprise, downstairs was still quite empty and we were told service might be a bit slow while the waiter dashed between the two levels. However, service was just fine I thought. He came around prompted to take our orders and the food was also brought out quite quickly. 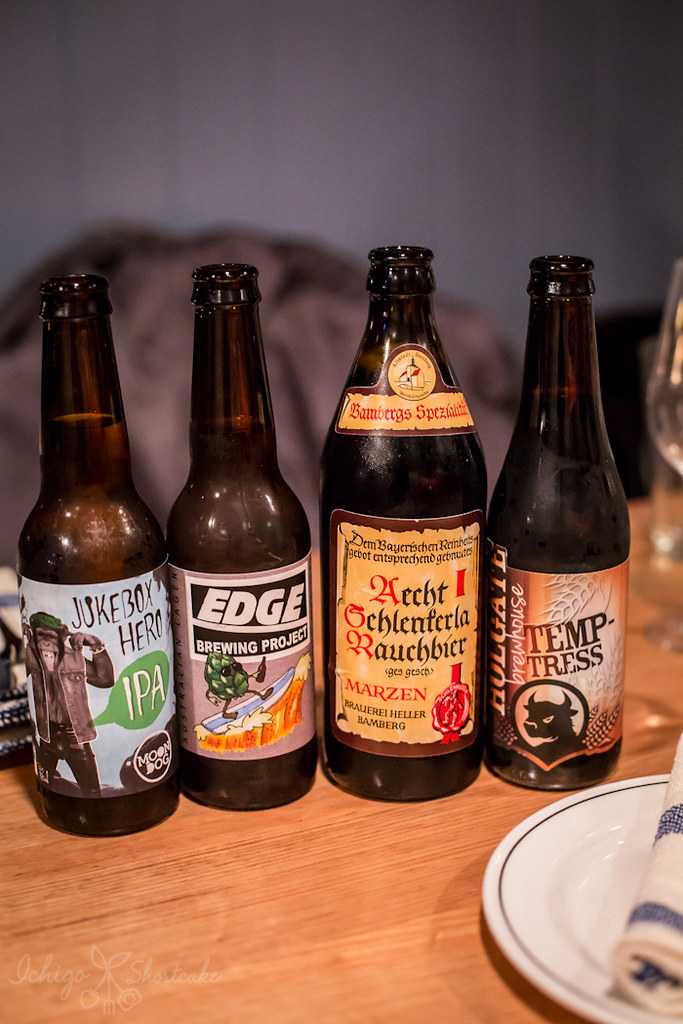 The Jukebox Hero IPA was rather malty for an IPA instead of the usual huge hit of bitterness. I actually liked it a lot more than regular IPAs because I can’t take the bitter as much but it might not appeal to real IPA drinkers. It was 330ml and the full bodied, almost smokey flavours masked the 7% alcohol. We actually ordered this beer in to the shop after we tried it here.

The Cool Hops by Edge Brewing Project was 4.7% and notably a lot lighter than the rest of the beers we had. It may have been a good thing because it matched with food a lot better. The heavier beers tend to stick to your mouth and leave a strong aftertaste which can affect your food. It poured as slightly amber/orange and was quite smooth and not too hoppy.

The Temptress was delicious. I love my dark beers because they are so tasty. It poured almost black with rich chocolatey tones and a hint of vanilla and licorice.

Now for the Aecht Schlenkerla Rauchbier Märzen. Cough. It’s a German beer (500ml) which was very smokey. This was a recommendation by the waiter to go with our pork belly main. It matched very well as you can imagine. It poured dark brown and smelted like a bonfire which tasted smokey as well but wasn’t actually heavy on the palate. It was the only non-Australian beer we had that night.

Now on to food. It was quite hard to choose what to have, even though the menu wasn’t all that big. Yuye and I shared the chicken waffles ($15) which came with 3 morsels of pate, terrine, crispy chicken skin, orange caramel on top of waffle pieces. It was a cold dish but had great textural elements and the flavours worked well together. I’m always unsure about cold waffles though and thought it was a tad on the heavy side, so any bigger in size I may not be able to finish. 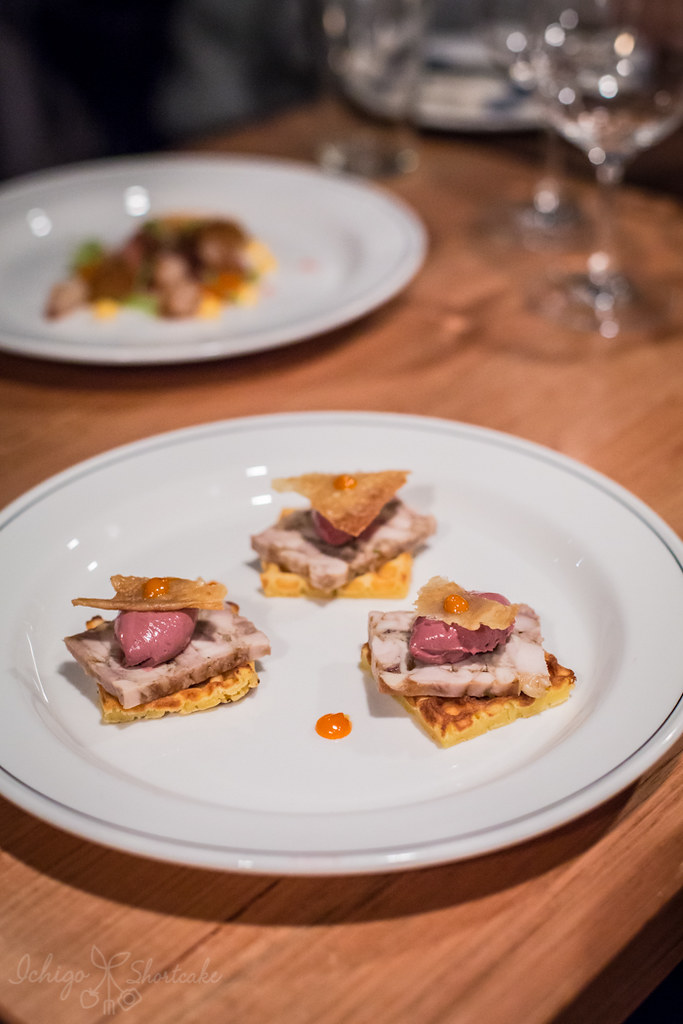 We also shared the black kingfish ceviche ($15.50). Yuye almost talked me out of ordering this dish because he dislikes ceviches (thinks they’re usually too sour). But I am SO glad I ordered this dish. It was a perfect balance of all the elements including textures, taste and plating. It had just a hint of sourness which was enough to whet my appetite. I loved the crunchy quinoa that went so well with the rest of the dish, not to mention it’s very healthy. The kingfish was lightly marinated and was so fresh. It was overall a very intricately thought out and executed dish which was by far my favourite of the night. 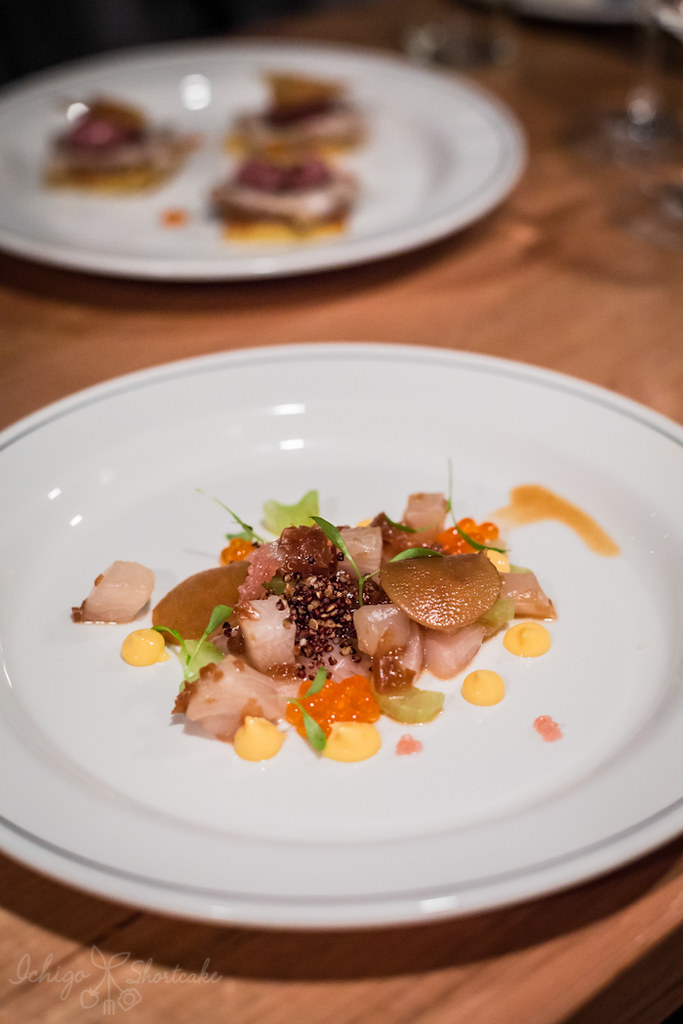 Our mains included the slow braised lamb neck ($21) with hand rolled spaghetti, turnips and manchego. I loved the texture of the spaghetti which was obviously hand made. The lamb was seriously melt in my mouth and infused all the flavours from the slow braising. I especially loved the huge pile of shaved parmesan on top. Who can say no to a whole lot of cheese right? 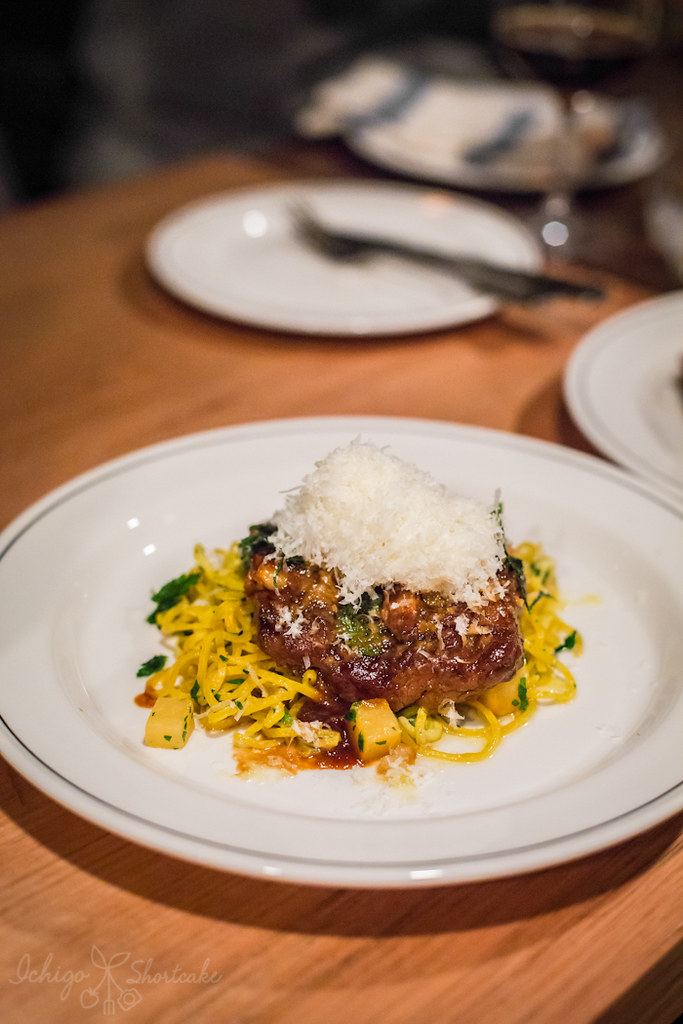 Our favourite main though was the Southern style pork belly chops with sauerkraut, apple sauce and a lot of crackling ($22). For those of you who have followed me for a while, you’d know that I LOVE pork belly. It’s arguably my favourite meat. This version was very well cooked and was so juicy and soft. Topped with crispy crackling and paired with the acidic of the sauerkraut, who can possibly resist? It was just a tad on the oily side though because some of the fat wasn’t rendered off. 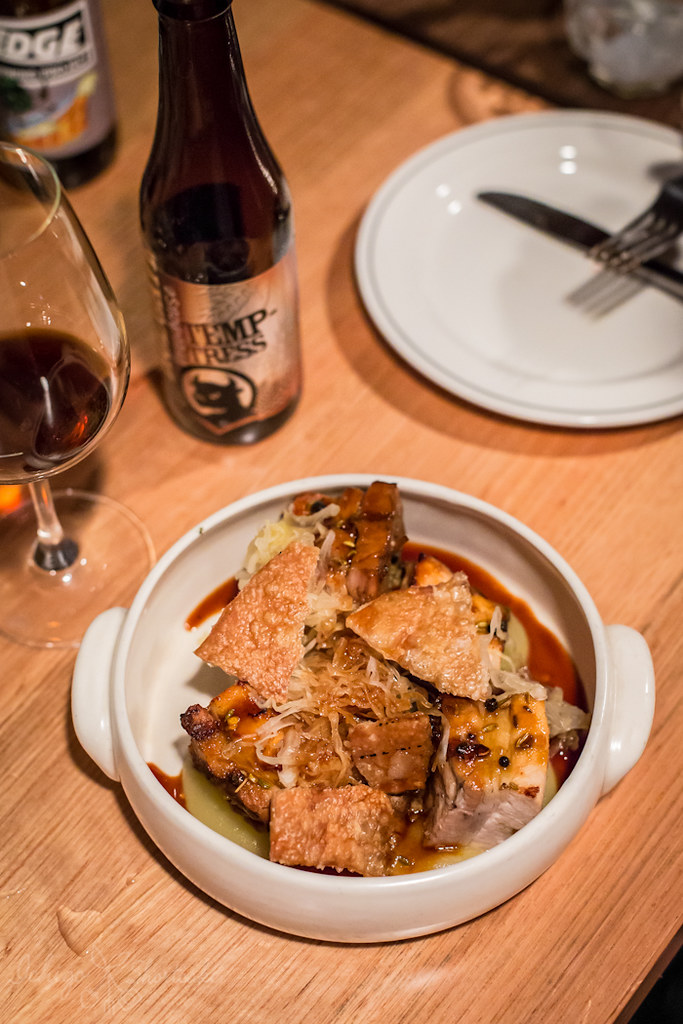 Sam’s pork trotter and ham hock nuggets ($15) was huge. It came with eight bites of crunchy, umami morsels which were full of meaty goodness. 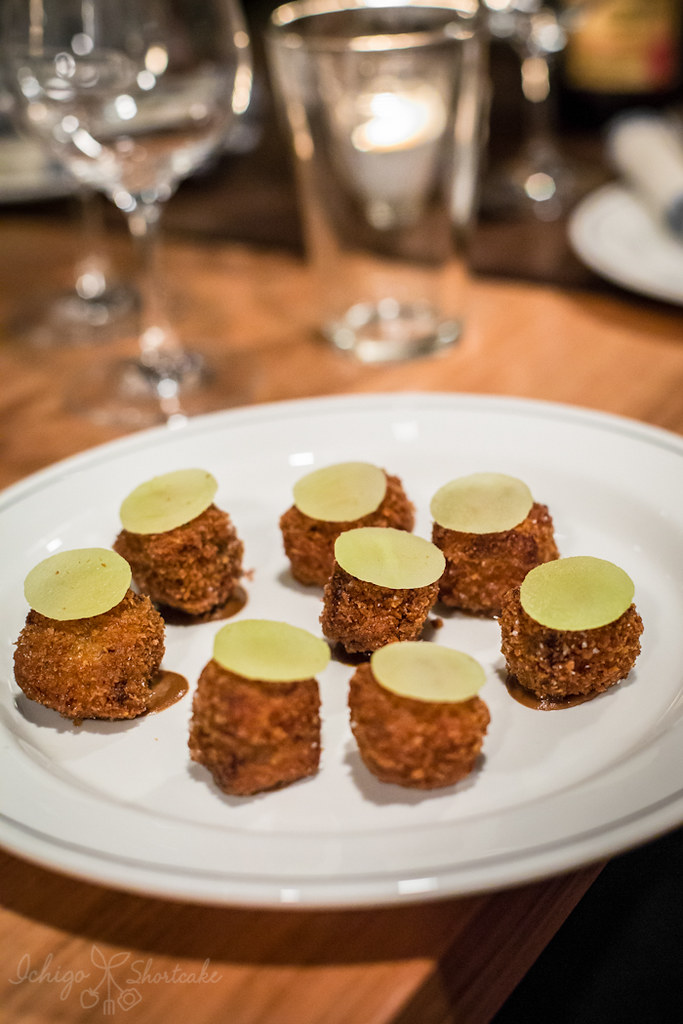 Racheese’s smokey beef brisket with carrot remoulade ($23.50) was also very tender. It came with gravy to pour on top just like a good roast would. However, as I don’t quite love carrots (those that are not in stews), I’m not quite sure about the remoulade. 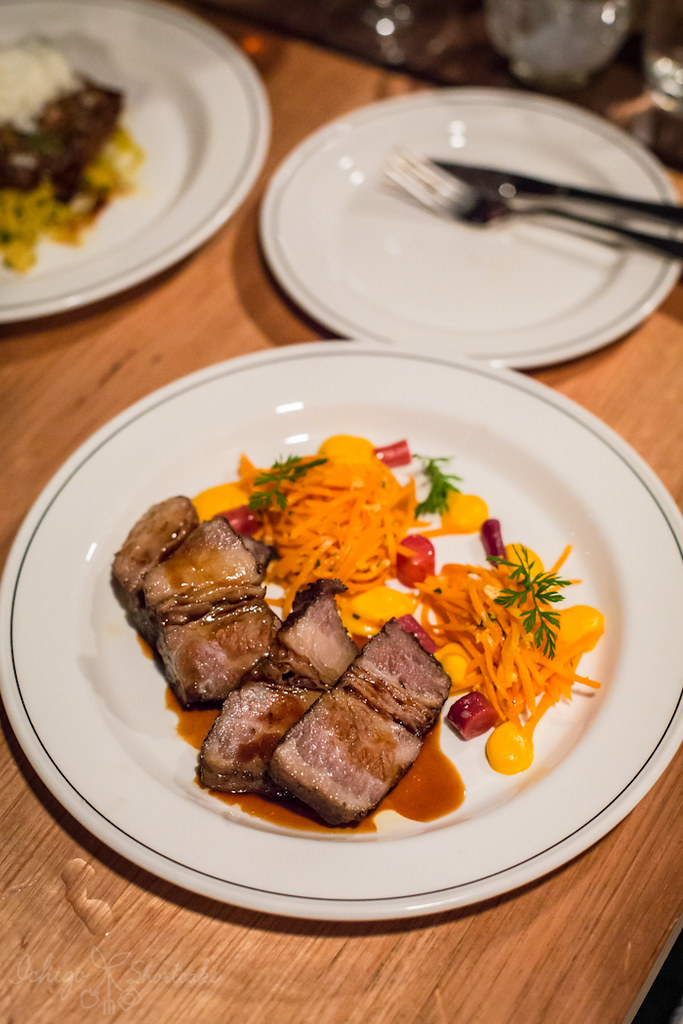 Overall it was a fantastic experience. It might not be the cheapest meal around nor the fastest at service, but the dishes here are quite decent and we couldn’t really fault any of the ones we ordered. The beers too are carefully selected to match the food for a well rounded experience. I suggest making a booking if you can to avoid disappointment because it can get very busy. If you don’t feel like having a proper meal, you can always sit at the bar and have a few drinks as well.