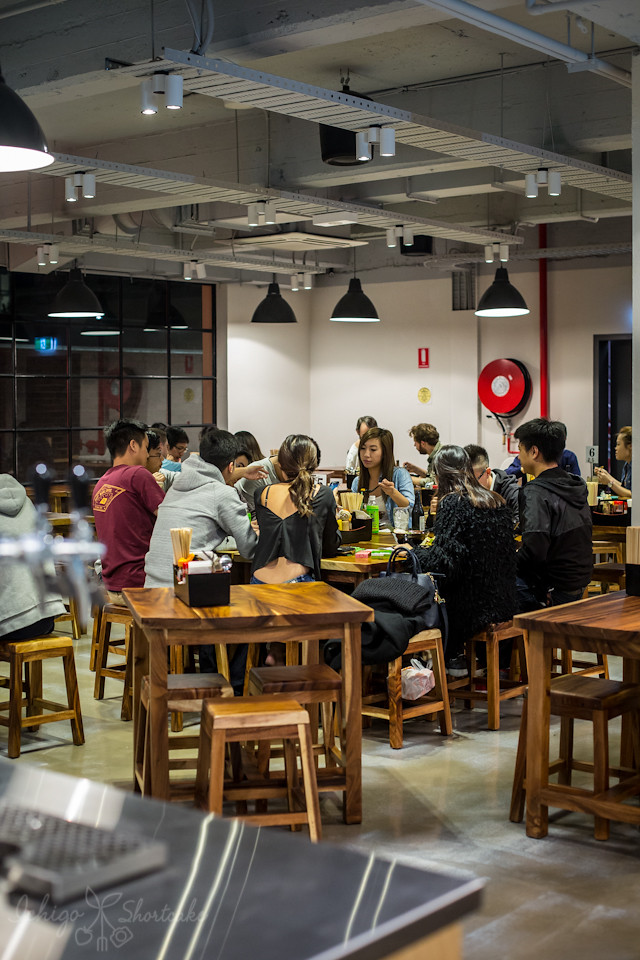 Who here doesn’t like a thick bowl of porky noodles? The kind that makes you slurp and burp and then makes you want seconds? I’m a huge advocate of Japanese ramen, especially the tonkotsu kind which is made with pork bones and the soup is so thick and gelatinous that it will make your lips stick together. I love it. I can have it everyday and won’t get sick of it.

Ramen is a huge part of Japanese culture and is readily available in Japan. There’s literally one around every corner and we’ve never had a bad ramen there. Although the fabulous bowl of Japanese treasure arrived in Australia quite some time ago, I think there’s only one restaurant I’ve been to that can compare to the ones we had in Japan and that’s Gumshara in Sydney (I must remember to write the post…). 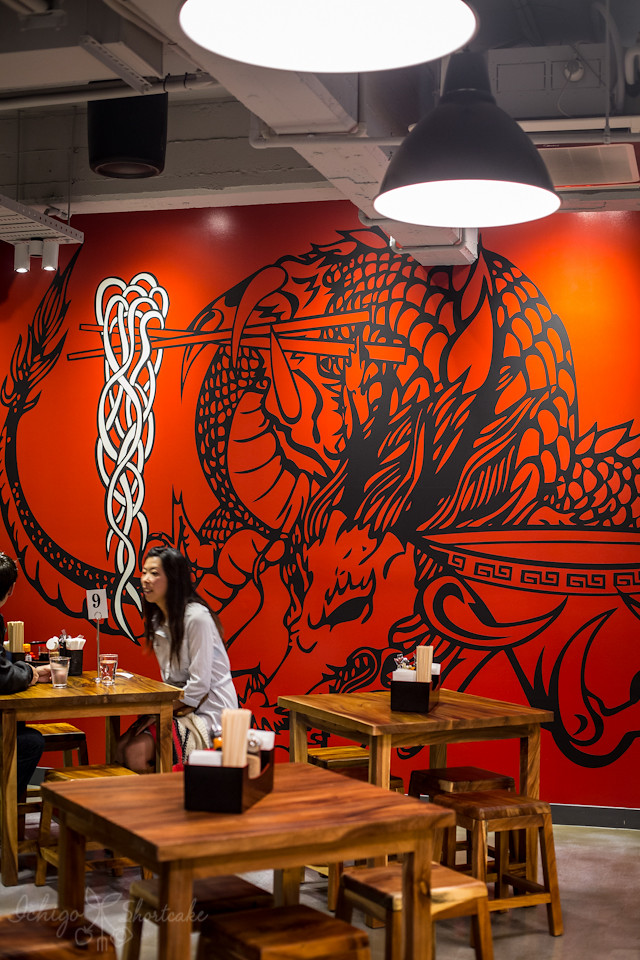 After eating at Gumshara, eating ramen here in Melbourne is just not the same anymore. Nothing really compares in terms of soup thickness and flavour.

When Fukuryu Ramen opened up, I was very eager to give it a go, especially after a friend said it was good. At least it might be the best in Melbourne at the time.

Fukuryu is hidden on the second floor of a building tucked away in a dark, stabby laneway in Chinatown. You’d think they wouldn’t get much foot traffic but having been there twice since opening, both times were packed to the brim. That’s the Melbourne foodie culture for you.

The restaurant is clean, modern and somewhat western compared to other ramen places. The ordering system is simple. You order and pay at the counter before you sit down. There are self serve water (and even sparkling water!) against the wall and there’s even a free green tea soft serve at the conclusion of your meal (not sure how long that would last though). 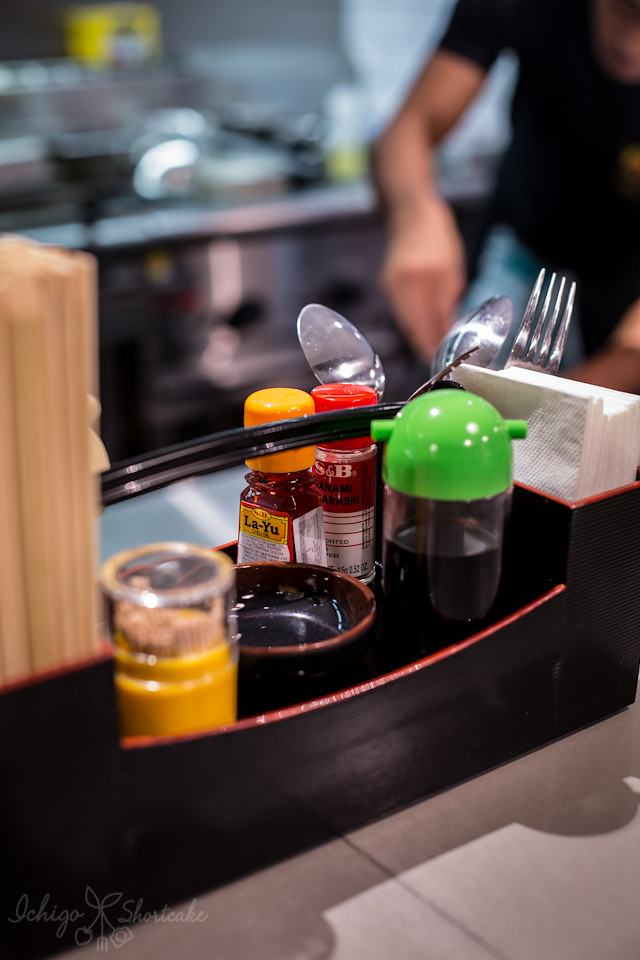 My two visits yielded slightly different experiences. For a store that just opened (at the time of visit) it was understandable that they were still trying to find their feet and a little bit of inconsistency was okay.

During my first visit, we decided to sit at the counter to watch the masters at work (also because there were no other seats available). The bowls here are reasonably priced, although portions (at the start) were not big by any means. 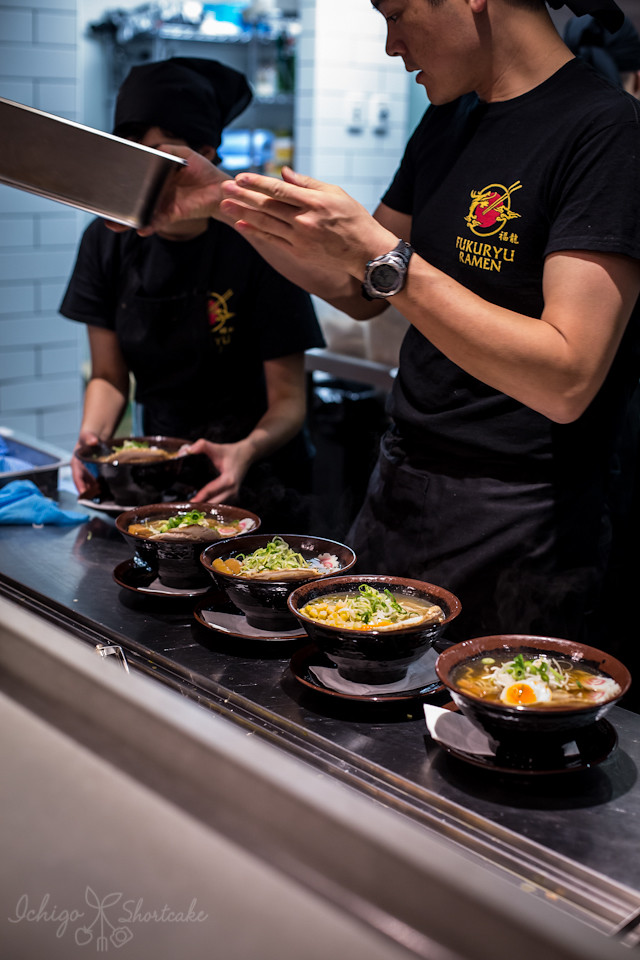 The soup for the tonkotsu ramen ($11.90 for a regular) was average thickness, I like mine a lot thicker and a lot porkier but it did still have good flavours and was seasoned well.

The pork was tender and well cooked, however, it was served cold. This made the ramen inconsistent as I ate warm noodles and drank hot soup but then ate cold meat.

I did quite like the fact that they made their own menma (pickled bamboo). I could have eaten a whole tub of it! 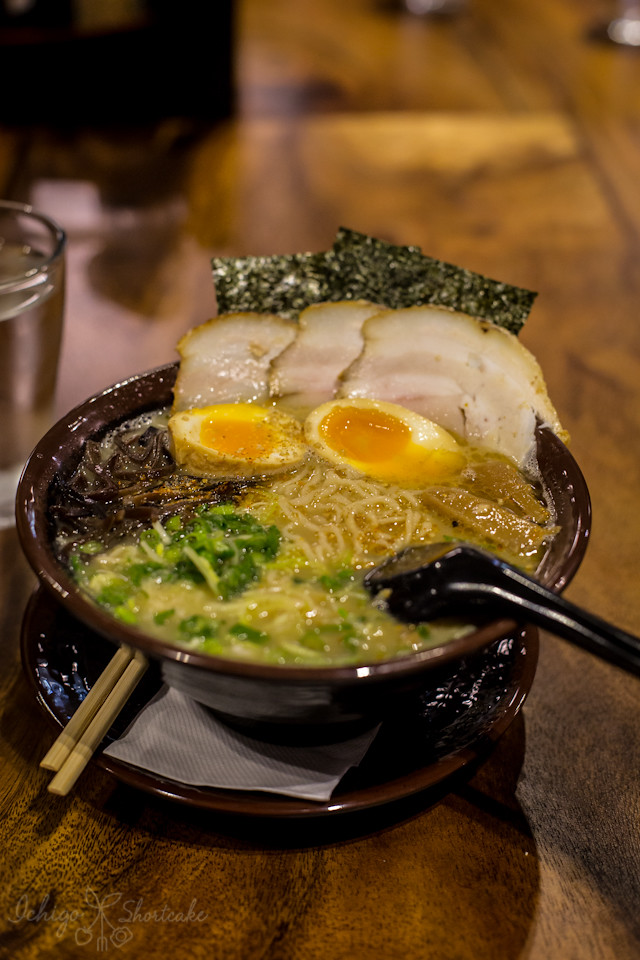 We also ordered gyoza (dumplings) to share. It was served with a green citrusy salsa which was quite interesting and surprisingly went well with the gyoza. The gyozas themselves were quite average though which was a let down. They were inconsistently cooked with some of them almost black at the bottom. I wouldn’t recommend getting gyozas here. 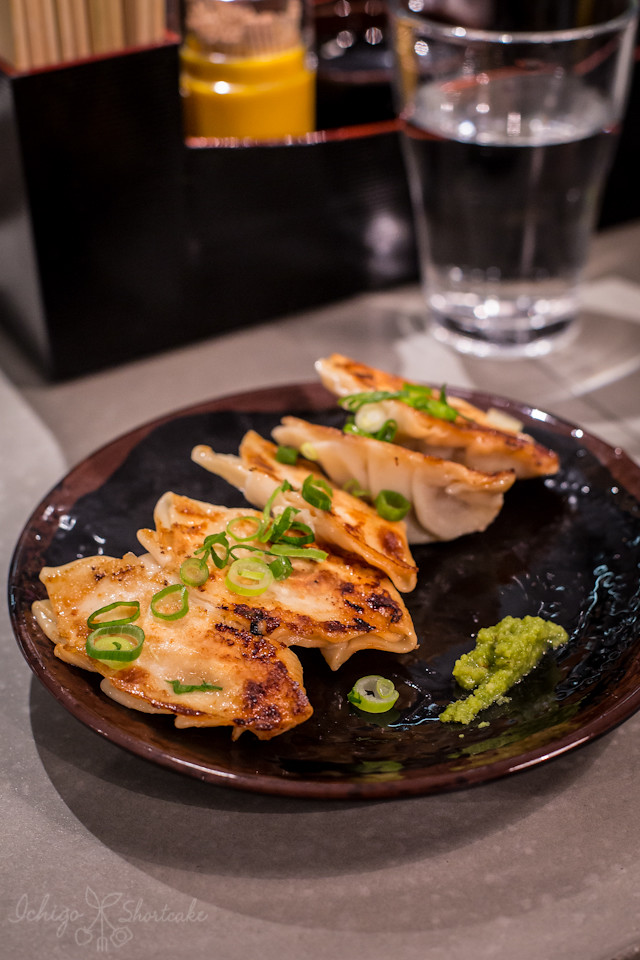 Our second visit was a lot better. Although the soup (I thought) got even thinner and the bamboo amount decreased, the pork was a lot better and the bowls now come in small ($7.90), medium ($11.90) and large ($14.90). I even saw some girls on the next table ordering a large to share between them.

The large ramen was literally double the regular size. There were six pieces of pork compared to only 3 in the regular and 1 whole egg instead of half. Each additional half egg cost 50 cents more. Being the gluttons (and egg lovers) that we are, we ordered half an egg extra each so that’s why you see so many eggs everywhere. Yuye’s large bowl almost looks like an alien with many gooey eyes.

The noodles were springy and soaked up the soup to give that well rounded ramen experience. 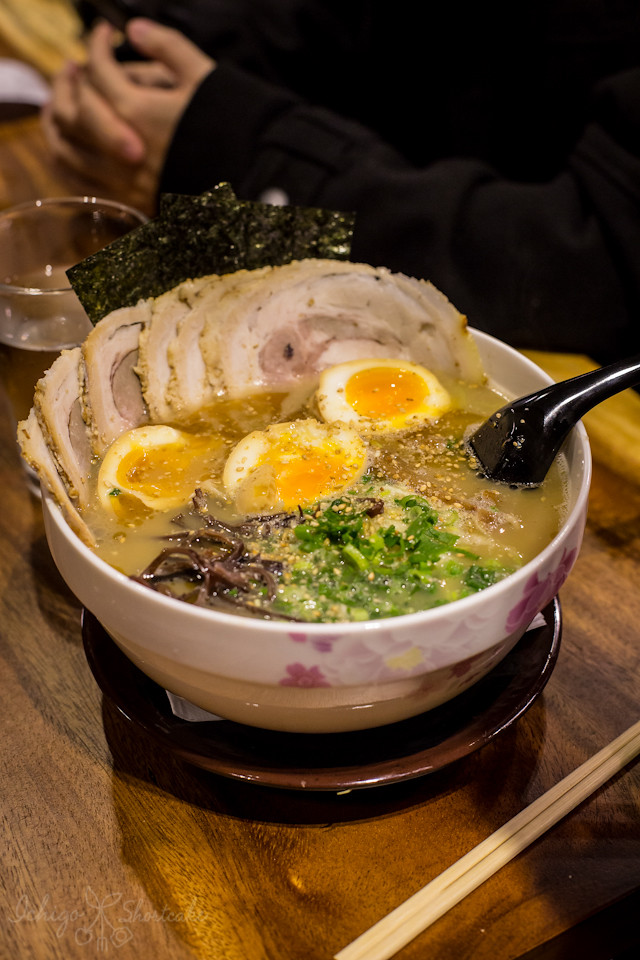 We also ordered chicken karaage (fried chicken pieces) on top of our ramen. That was a mistake as my eyes are always bigger than my stomach. Nevertheless, we finished it all and it was quite tasty. It was lightly fried and not too oily, but it would have been nice to have a little lemon juice to cut the fattiness. 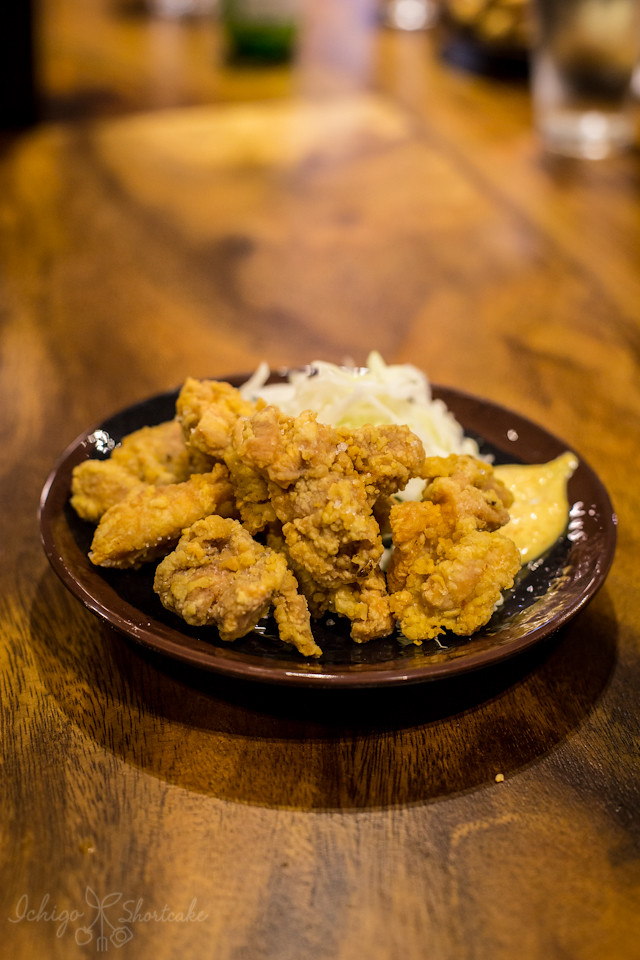 We finished off the meal with the free green tea soft serve of course. It wasn’t the best soft serve I had because it was quite light and not as creamy as some others, but when it’s free, I wouldn’t complain! 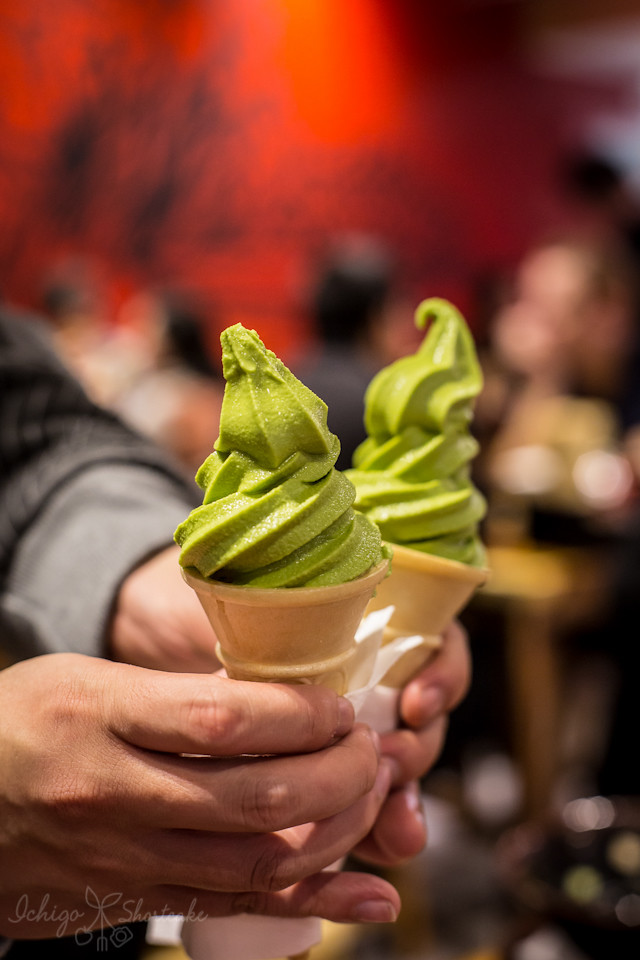 Overall it wasn’t a bad experience, especially in Melbourne where that perfect slurp is still somewhat lacking. Fukuryu Ramen does need to pick up its game though as more and more rival joints are opening up, in a frantic attempt to ride that popular ramen bandwagon.

EDIT (18/09/2014): We dined here again a few days ago but the egg was no longer 50c, but rather $1.50 for just half! That makes a whole egg $3 which I think it quite expensive. They have also changed the egg from a salt based egg to a soy sauce based egg so the egg is a lot more marinated and darker in colour. The tonkotsu soup base is actually thicker than before so that was an improvement. The green tea soft serve is no longer free, unless if you’re willing to put your face up on social media along with a bowl of their noodles. I guess they are still evolving so visiting only once is not sufficient to place judgement on the quality of food here.